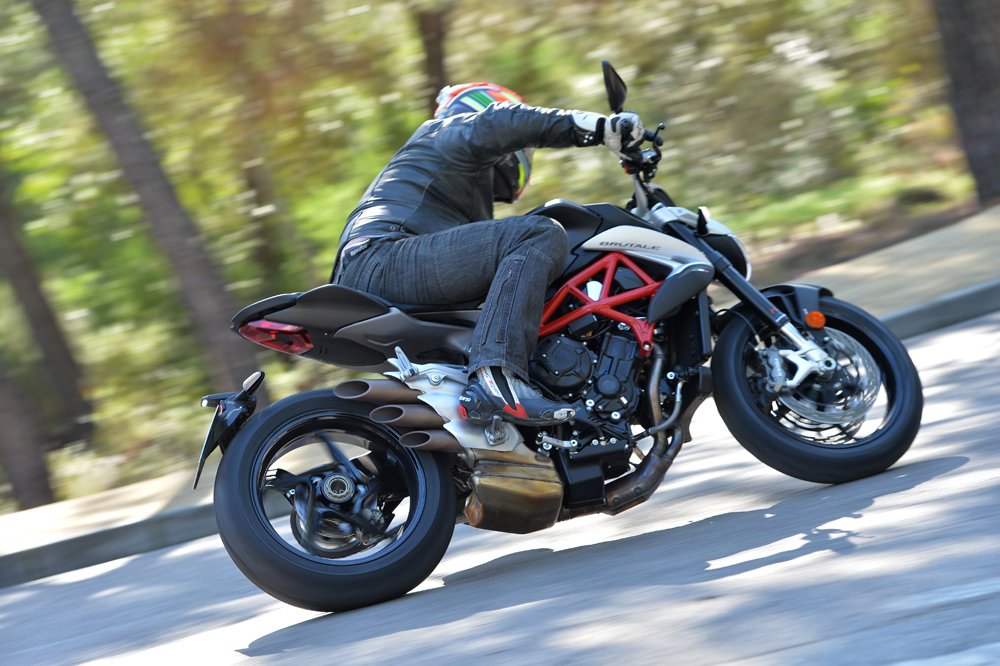 “How is handling compromised while nursing an erection,” was probably the finest pre-ride enquiry regarding the 2016 MV Agusta Brutale 800. MV’s stalwart naked of 15 years has undergone a hefty set of engine and chassis revisions in 800cc form, plus obeying to bastard Euro4 emission regs – all whilst retaining those irresistible Latin lines.

When a manufacturer declares various changes to accommodate a wider spread of experience and abilities, there’s always a sense of dulling down, diluting dynamics. A reduction in peak power and a weight increase aren’t the sort of snippets you want to hear during the press presentation, but the Brutale 800 is a perfect example of why headline figures – and particularly dyno numbers – frequently mean bugger-all. Make no mistake: this bike blew my back doors clean off the hinges.

By their own admittance, the previous incarnation was intimidating to less experienced riders: edgy, aggressive, always prone to throwing a wobbler and living up to its name by offering sophisticated brutality, very much like premium bondage. MV has relaxed the Brutale’s geometry, plumped up the low-mid torque, refined the ride-by-wire trickery and, generally, added a smattering of versatility via a raft of changes. More tech deets at the bottom… 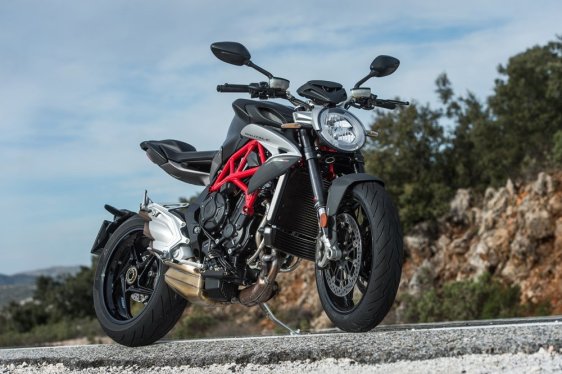 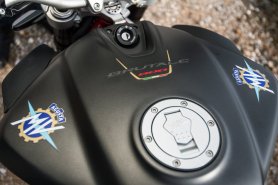 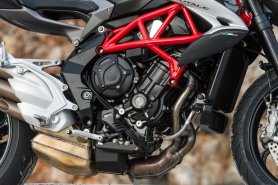 If you’ve yet to straddle a Brutale, its riding position is aggressive on the upper torso with a reach to the ‘bars that sling you over the front wheel. Conversely, your legs are relatively relaxed with low-slung pegs that feel superbly natural. As we pootled out of the hotel’s grounds on the outskirts of Marbella, MV’s attention to the electronics was instantly evident. MVs of old were renowned for iffy ride-by-wire execution, snatchy throttles triggered by the slightest of bumps. Dare I say it, the Brutale almost feels normal, besides the quirkily super-light throttle action.

We started the day in ‘Normal’ riding mode, which offers a slightly softer throttle response that proved ideal in urban surroundings and constant on/off throttle inputs. ‘Sport’ was soon engaged and adds a smidgen of aggression, a more direct reaction from the gas. There’s still appreciation of a digitised connection to the rear wheel, although 2016’s changes are far less arcade like.

Press launches staged around Ronda usually result in dangerous riding competitions, exacerbated by dynamically impeccable bikes. Hundreds of years ago, the world’s sexiest corner made sweet love to the world’s other sexiest corner, and all their babies were involved in incestrial breeding, thus the fabled Ronda road was born. It’s not hard to understand why car and bike manufacturers use this stretch for R&D purposes, packing every manner of corner and surface into mountain roads. 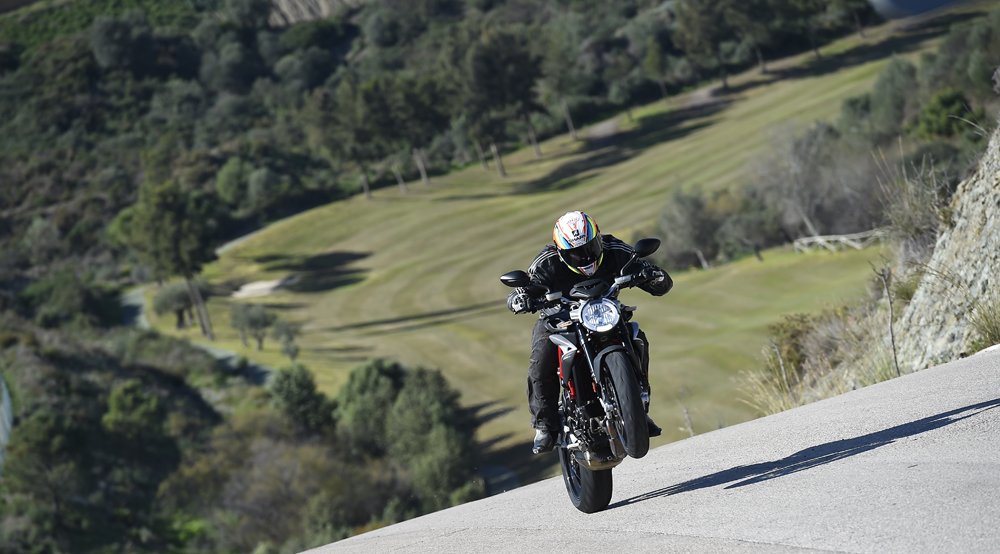 MV claims that 90% of the Brutale’s available torque is delivered between 5,800rpm and 10,200rpm, which was soon grasped as the Spanish roads opened up and naughtier speeds ensued. I’ve always maintained that MV’s 800cc triple engine is innately more suited to naked bikes, allowing those intrinsic three-pot protocols to be fully exploited. Despite the trademark counter-rotating crank and stupidly fast-spinning motor, the previous version (in both F3 and Brutale formats) was often lethargic during the lower echelons of revs, waiting for the engine to play catch-up with throttle input. The delivery is now more direct and eager to pull from much lower down, yet suave in function. Granted, the top-end has been palpably sacrificed but a bulbous midrange far outweighs running out of revs too quickly, with numerous gear options and deceptive amounts of crisp power available for any corner.

So, how is handling compromised when nursing that erection? Bad news: flaccidity never returns because the ride is just as sexy as the aesthetics. The Brutale was soon exuding insane amounts of confidence to push on, and I constantly had to remind myself that she was sporting Pirelli Rosso IIIs, which are purely road-based rubber, but that didn’t seem to bother the 800. Can I feel the extra weight? Not a whiff. If anything, the Brutale’s salad dodging tactics – along with the geometry tweaks – have improved road holding and aided stability, allowing more committed cornering without the fear of twitchy consequences. Only MV’s test riders might feel any handling deficiencies that come with the 2016 model’s fine-tuning. 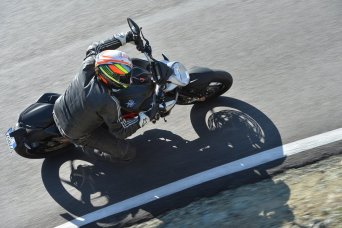 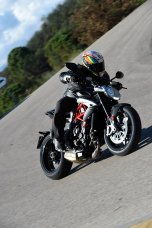 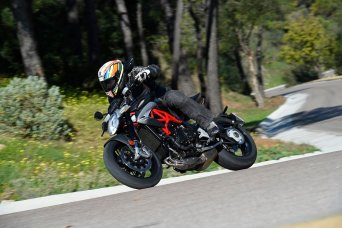 There’s a beautiful balance to the chassis that’s pretty much unique to the Brutale, intuitively attacking bends with enthusiastic apex speed reminiscent of a bona fide supersports steed. I can’t think of another un-faired bike that carries corner speed so naturally. The engine braking always feels bang-on, unwaveringly during corner entry with an assuring front-end sensation off the throttle, and only track riding will leave you wanting more from the rather old-school braking set-up.

Steering is certainly more neutral and progressive than before, yet just a pacey without wrestling the Brutale. A mere vestige of ‘bar sends the taut chassis on its side and only occasionally did it wag its head in protest, though never reaching soiled panties stages. With a morbidly obese pilot onboard like myself, the shock had a tendency to squat under gas and rebound too quickly over bumps during change of direction, but this was probably down to my burger addiction more than anything else. Otherwise, I couldn’t fault the suspension set-up that offers a decent blend of poise and pliancy.

Ronda’s myriad of second, third and fourth gear corners were being chewed up by the Brutale, fluidly gallivanting from apex to apex. Contrary to purists’ beliefs, the plethora of electronic goodies adds to the Brutale’s thrills. With a seamless quickshifter and auto-blipper combo for clutchless shifting combining with the free-revving powerplant, feeding gears for fun becomes part of the regime aboard the new 800. There’s a newfound factory-spec bang courtesy of the quickshifter when the throttle is pinned and the engine is singing, offsetting the quieter exhaust note that’s necessitated by Euro4 emission regs. It still sounds sincerely mischievous and distinctive to the triple-pot configuration, and the induction bark has been exaggerated through artificial means. 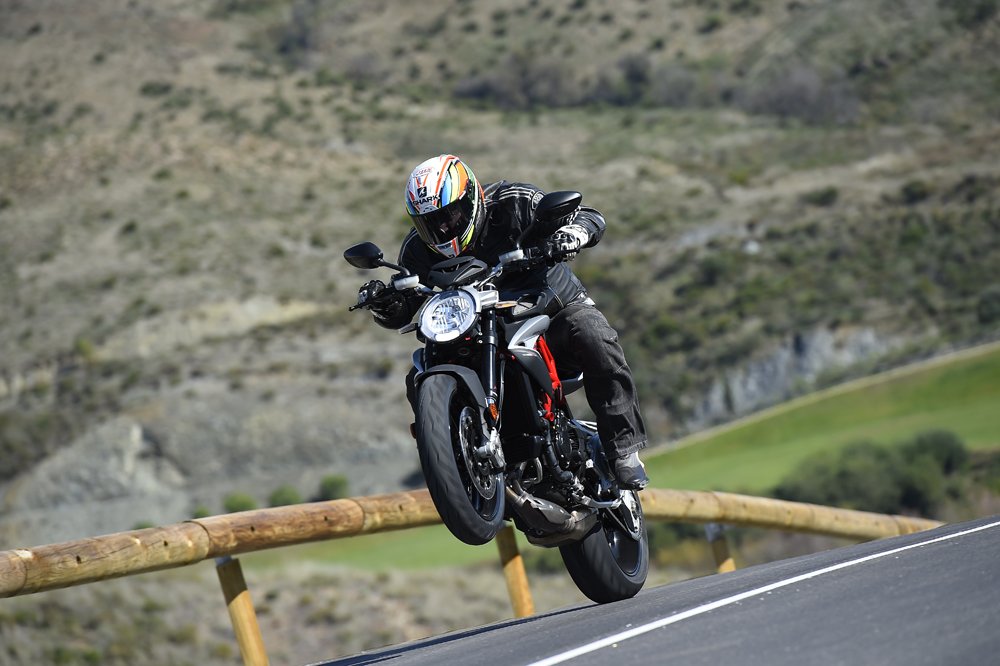 There’s nothing groundbreaking here but the subtle tweaks result in a huge improvement. After searching for fresh superlatives and attempting to abstain from lavish praise, the Brutale is virtually flawless. In fact, the solitary objective negatives are MV’s persistence on retaining the archaic switchgear to toggle through electronic aids, and the knife-edged seat that occasionally fouled my inner thigh after long periods in the saddle (riders in full leathers didn’t complain though).

Above all else, the Brutale is immensely fun regardless of speed or environment. I hate dropping the C-bomb into any prose, though it’s impossible not to sycophantically rave about its character and integral thrills that simply cannot be matched by others. Is this the perfect roadster? Is this all you’ll ever need from a naked bike? There’s a lot to be said for extracting every last horsepower from a lower capacity steed: more involving, more rewarding and deeply satisfying. The Brutale 800 never tries to kill you but constantly delivers what feels like the perfect amount of Italian stallions.

Obvious adversaries include Ducati’s Monster 821, Yamaha’s MT-09 and Triumph’s Street Triple R. For years now, the Street Trip’ has been the benchmark for naked middleweights. Sorry, Triumph. Not anymore. Some could argue that £10,499 (or €12,680 for our Euro brethren) and cubic advantage unfairly outclasses the Street Triple but the Brutale is a naked, it’s a middleweight, and it’s fucking awesome. Sure, some of the 800’s idiosyncrasies won’t suit everyone’s tastes but only an unhealthy amount of British patriotism and/or an inexplicable partiality for the Triumph’s looks could now be forgiven for overlooking the Brutale.

Needless to say, there’ll be a video along shortly once his lordship has returned form the US… 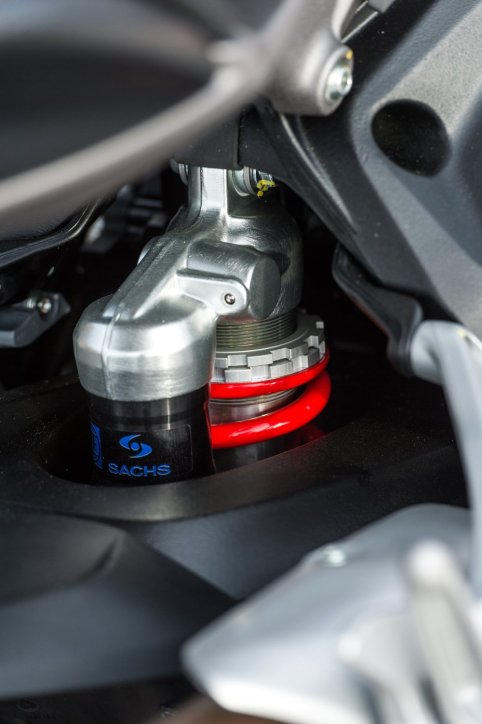 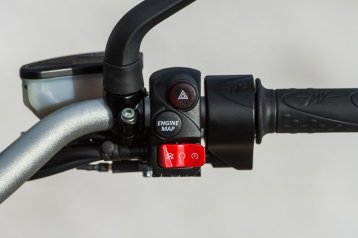 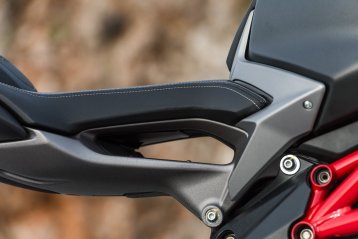 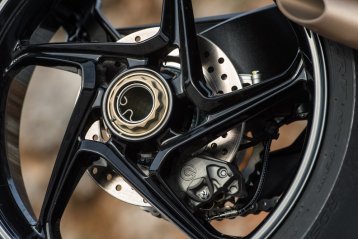 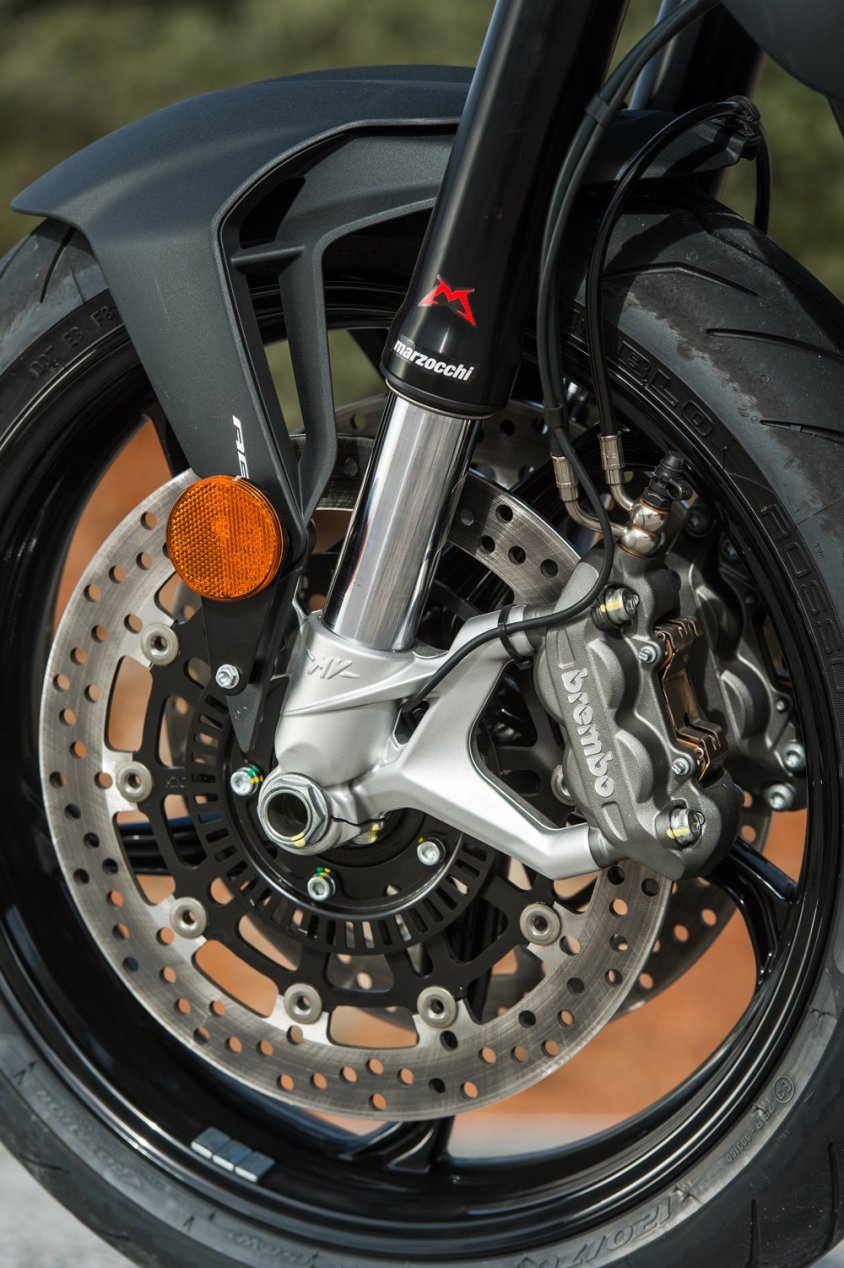 Engine: MV’s take on the triple configuration is still beautifully raw in comparison with rivals. Although peak power is down by 8bhp to 116bhp, the bottom-end and midrange have been treated to an 18% increase in torque levels. New cams, pistons and bellmouths are responsible, and gear ratios have been revised (widened) to match the extra torque. MV claims 20% better fuel economy.

Chassis: The fundamental chassis of old remains, but MV engineers have opened up the steering head angle from 23.2° to 24.4° and lengthened wheelbase by 20mm, upping the Brutale’s trail to 103.5mm. The steel trellis/aluminium plate frame combination is controlled by fully adjustable 43mm Marzocchi forks and a Sachs shock.

Electronics: As with most MV Agustas, the Brutale comes rolling with a smorgasbord of valuable electronics that have been updated with new firmware. There are three rider modes (Rain, Normal and Sport) plus a Custom option for personal preferences. 8-level TC and ABS provide a mix of safety and performance, while throttle sensitivity, engine response, engine braking, torque levels and rev-limiter harshness can all be changed on the hoof. A quickshifter and auto-blipper complete the package.