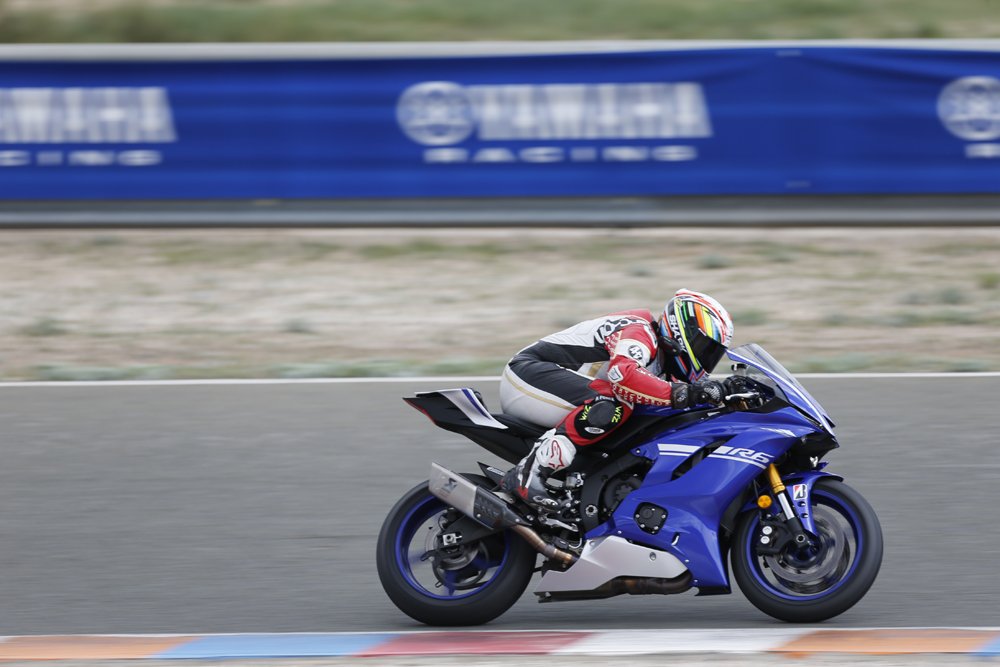 My head is buried in the R6’s new dash; I’m almost chewing on the needle as it flirts with the redline. Every limb contorted behind its fresh fairings in a desperate attempt to maximise straight-line speed. My wrists are aching from wanking pinning the throttle and Almeria’s relentless nature shows no mercy. But I’m also riding one of the sexiest track-focused steeds ever created, a bike that thrives on massive corner speed and big-lean heroics, flattering the pilot in the process.

“There’s absolutely nothing rational about launching a new R6,” was the quote from a senior Yamaha employee at the 2017 Yamaha R6 launch in Almeria, Spain. Die-hard supersport fans (and us) will unequivocally oppose, while pragmatists will sympathise with such a statement – and it’s all to do with bloody Euro4 legislation.

If the advent of Euro3 was a bleak turning point for 600s, Euro4 should be the death. Peak power figures have been trimmed and manufacturers’ development diminishing, and if there’s a class that’ll succumb to Brussels’ rulings, it might be the 600s – no scope for cubic increase due to racing regs and (new) bike sales have been abysmal. Negligible updates aside, the R6 – like many other 600s – has remained relatively unchanged since 2006. Why would someone spend £10k on the bike that hasn’t drastically improved in a decade, when the used market offers so much bang-for-buck? It’s a vicious circle. The bikes haven’t changed, so punters aren’t buying them, therefore manufacturers spread their budgets elsewhere. Sad faces everywhere. Hide the sharps. 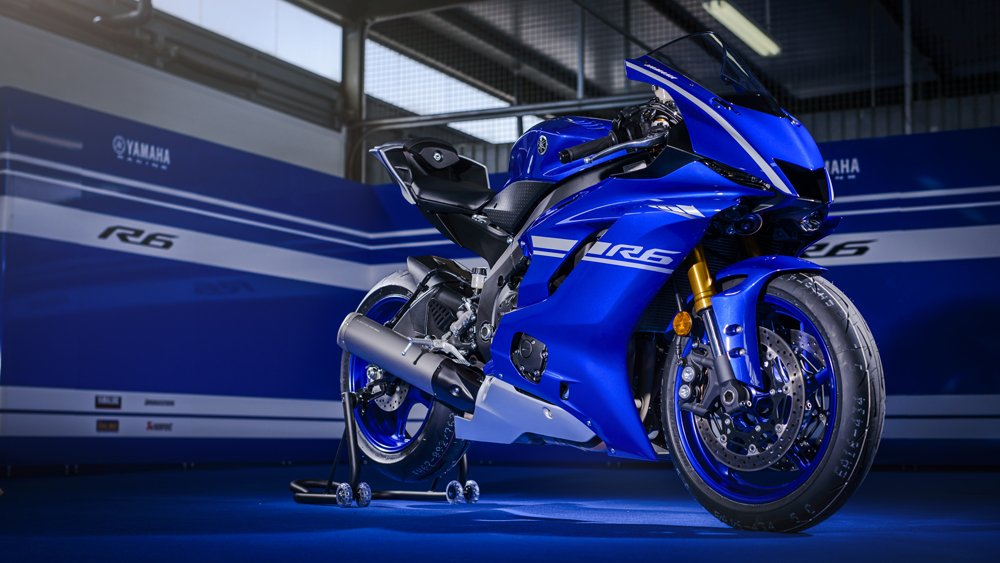 But with the 2017 YZF-R6, Yamaha is hoping to change the game, buck trends if you will. Joining some fresh R1-derived aesthetics are subtle chassis changes, the addition of rider aids and the obvious Euro4 compliancy. A new design and electronics were, apparently, top of punters’ wishlists according to Yamaha.

Eagerly awaiting our first session in Almeria’s pit lane, it was apparent that 2017’s fresh cosmetics equate to far more than inducing a stiffy. The tank and seat are much thinner than the previous model, the fairings also leaner, although the screen is 50mm higher to improve racing tucks. In fact, Yamaha reckon this is the most aerodynamic production Yammy ever, so long as David Haye isn’t in the saddle. No doubt it’ll aid pint-sized jockeys but it’s now aerodynamically tougher for the heftier among us. Otherwise, the riding position remains the same, complete with unrelenting high footpegs for ample ground clearance.

We began the first session in STD mode and with TC set to level 3. The bikes we were riding were completely stock, save for the official Akra’ slip-on can, mirrors removed and Bridgestone S21s replaced with much stickier R10s. The front brake lever’s span adjuster was set on 6 (closest to the ‘bar), and I set about tweaking it to 3 as one of the Yamaha technicians muttered that brake fade wouldn’t be an issue. Now, that’s a bold claim…

Exiting pit lane was a reminder of just how greedy this motor is. It requires massive amounts of clutch slip to accompany equal amounts of throttle just to pull away – and to confirm you’re not pulling away in top gear, although the convenient gear position indicator is the giveaway. Several sighting laps revealed the extent of the aforementioned Euro4 castration. The 2017 motor feels lethargic and, like previous models, requires an injection of 10,000rpm before coming to life. It’s no real shock that Yamaha neglected to release power figures until the press launch. At 116bhp, the 2017 model makes less power than the original R6 of 1999 and is 7bhp down on the previous engine. And all because a load of twats suits in Brussels have decided that penalising the solution rather than the problem is the way forward. 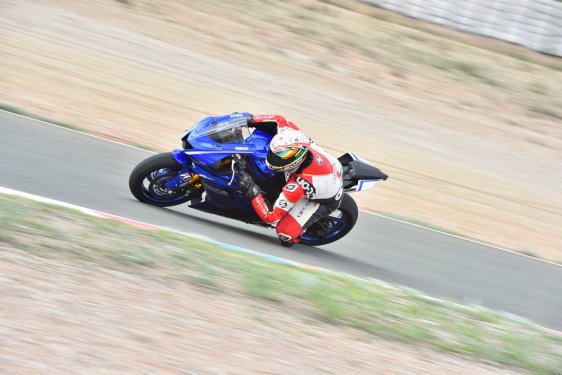 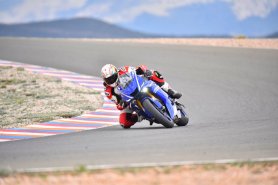 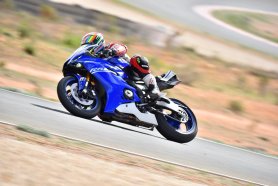 Most of Almeria is 2nd and 3rd gear fodder, teetering around the redline and maintaining momentum. Given the short powerband, gear selection is now even more critical, exaggerated on the exit of turn one as we climb the hill. The throttle has a lighter, more direct action and takes less effort to exploit. At around 14,000rpm, the shift light acts as an accurate gauge to hit the sublime quickshifter, as power noticeably curtails before the limiter interferes. I’m in 5th, approaching Almeria’s café and consequent heavy braking zone. A healthy two-finger dab on the lever confirmed 2017’s new anchor set-up is a palpable improvement over the previous wooden action, and there was no fade throughout that first session. It was strangely stable during downshifting too, a surprise after the 13s that was renowned for backing-in. The only corner entry gripe, right here, right now, was the lack of blipper.

If there’s a circuit that’ll punish poor handling like no other, it’s Almeria. But its ruthless onslaught of different corners, various gradients and constant abuse on the side of the tyre weren’t problematic chores for the R6. Despite weighing in at 1kg heavier than the outgoing model, the 2017 bike feels lighter (particularly during changes of direction) and sprightlier on its springs, and takes minimal effort to meet an apex. It’s also the mid-corner control and sheer poise that impressed, even during the first session – adjusting line and the ability to turn tighter without fear of tucking the front. The old suspension was rather two-staged and lacked progression throughout the stroke. Beefing up the forks from 41mm to KYB R1-derived 43mm puppies means a plusher execution and, along with new triple clamps, a sexier front-end in general. The whole bike feels less taut, yet more responsive and easier to ride. If I hadn’t known the full magnitude of 2017’s changes, I would have guessed at geometry changes. 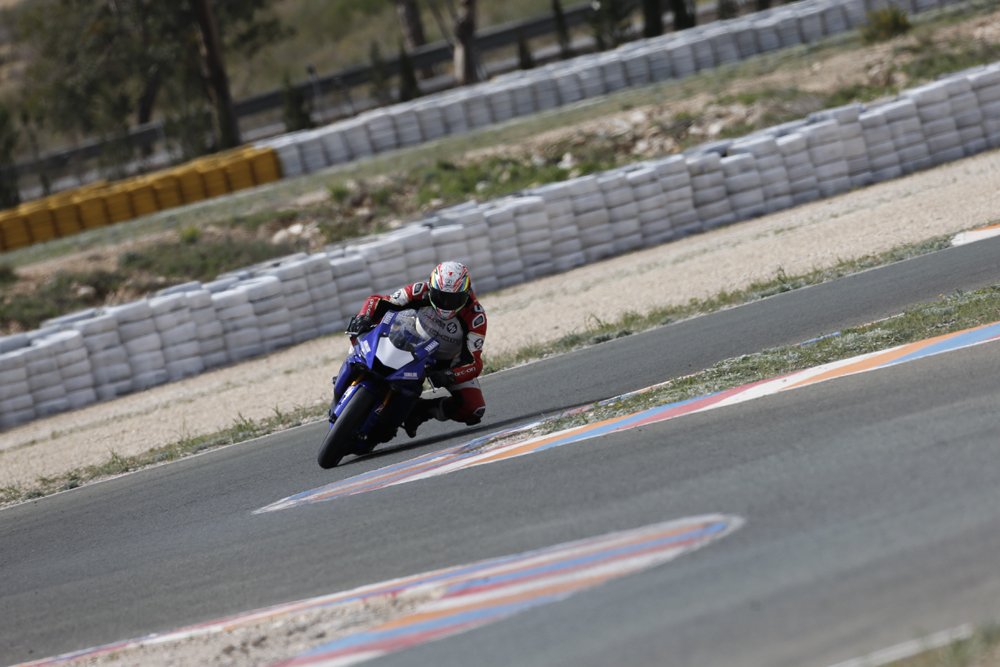 All too aware of a possible wrath of journalists bemoaning Euro4 engines, Yamaha dressed several bikes in kit parts; full Akra’ system, kit ECU and blipper to fulfil its potential. We all had one session on a kitted weapon and I opted to pinch one for my second session. Now, this was more like it – the bike most hoped that the 2017 R6 would be. A free-revving howler that punches out of corners rather than wheeze, there’s a noticeable hike in the midrange that seamlessly gushes into a top-end frenzy, and I was able to run a gear higher pretty much everywhere as a by-product of the extra goolies. It sounds naughty too, gargling on the overrun with the occasional belligerent backfire. All this with zero mechanical assistance and available for public consumption.

More than that, a weight saving of around 10kg transformed chassis dynamics. The diet gave the suspension and tyres less work to do, therefore the kitted bike felt slightly stiffer and far racier. Add some engine braking control changes that sanctioned more entry speed, and we could well have been sat on a pukka supersport racer. Albeit with a fat twat onboard.

Almeria is one of those circuits that require patience, plus the prerequisite for a rhythm. That tempo doesn’t magically appear in the first session, nor did the R6’s. After a few sessions of understanding its desires and switching to A mode – which is definitely our mode of choice – the whole circuit flowed and was an absolute joy to thrash onboard the R6. There’s no hiding from the missing ponies but A mode certainly livens things up, and the R6 gets better with added commitment. 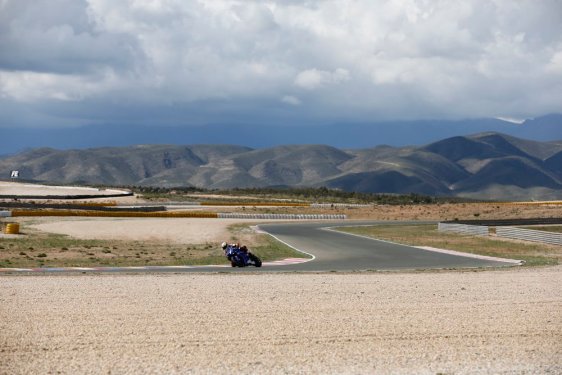 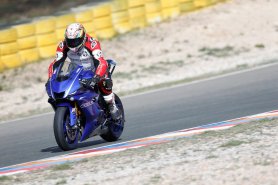 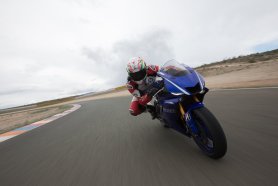 Reigning British Supersport champion, Tarran Mackenzie was present at the launch, kicking everyone’s butts and lending a helping hand. Of course, being a contracted Yamaha rider, I wasn’t going to ask Taz’s opinion of the bike, although he did say he couldn’t wait to swap his old R6 for the new model because of its chassis tekkers – and I couldn’t agree more. Rather than the willy-waving power of 1000cc superbikes, a large amount of riders would benefit from riding a 600 to understand corner speed. And there isn’t a better bike to learn the art of sniffing apexes than the 2017 Yamaha R6. Yes, we were on sticky race-spec R10s, but the inherent base of the bike will always remain prominent.

So, what of its road-going protocol? The previous model thrived on clipping apexes and chasing tenths, dominating any competition entered. And, in comparison with more versatile rivals, it was also a guff road bike; revvy, stiff and unyielding. In terms of engine, the clutch will take a mullering and it’s still a revvy bastard, but the chassis’ newfound aptitude will ensure a more fluid performance on the highways and finer bump management thanks to refined suspension.

Unless you’re racing or experienced/fast enough to reap the rewards of its understated upgrades, the asking price of £10,999 probably isn’t worth it when the used market is so rife. You’ll have to factor in another few grand for an exhaust and ECU tweaks anyway. That said, the R6, with subtle yet effective mods, now joins the Daytona 675 as the best handling supersports bike, and 2017’s changes are far more effective than the spec’ sheet suggests.

Bravo, Yamaha. There may not be enough tangible changes to appease some internet überlords, but taking the plunge and rejuvenating a dying class while others admit defeat deserves nothing but admiration. The fact that the 2017 R6 fits into a Spanish hotel lift at 2am is a bonus.*

*Alcohol may have been responsible 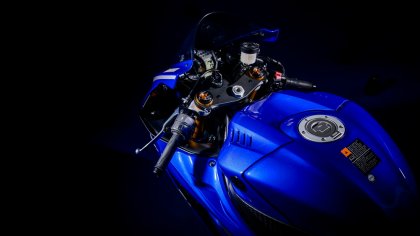 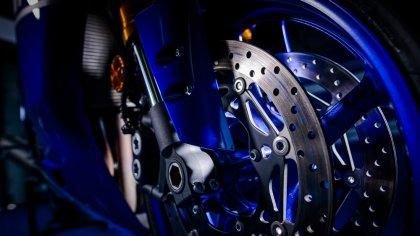 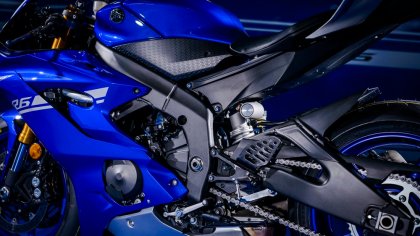 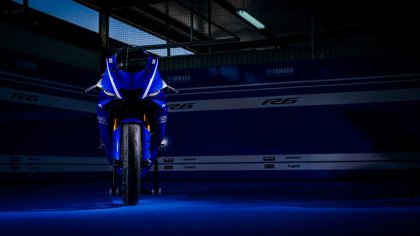 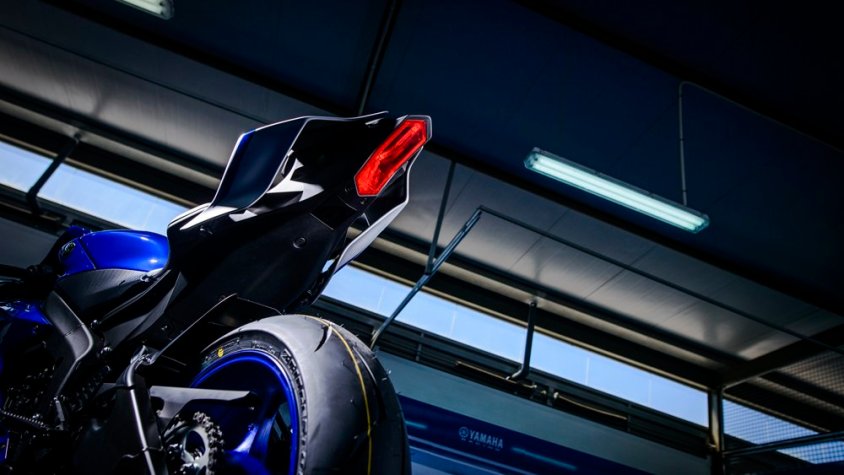 Engine: The 599cc four-pot engine remains unchanged, except for a modification to accommodate a gear position indicator, so the same 67 x 42.5mm bore and stroke numbers are retained, as are titanium valves and magnesium engine covers. The power sapping comes courtesy of added material in the catalytic converters for lower emissions.

Chassis: Aside from a new magnesium rear subframe, the 2017 R6’s main structure is the same – the whole bike weighs 1kg more at 190kg. A new lower triple clamp is thinner and is optimised for rigidity. New 43mm KYBs replace the old 41mm forks and brag a longer stroke and more adjustment, while the rear shock is almost the same (save for the preload adjuster). Replacing the old steel fuel tank is an aluminium item that weighs 1.2kg less. The wheels are the same except for new hubs to accommodate wheel speed sensors. Brakes are updated (thankfully), and the master cylinder, calipers and pads are similar to the R1’s. The front discs are 10mm bigger in diameter, and the MT-10’s ABS pump is used – which, like the R1, cannot be turned off.

Electronics: The big news is the addition of traction control and Yamaha’s D-Mode rider modes, with six levels of TC (plus off) and three modes to choose from: A (the most direct), STD (standard) and B, which is the softest. All three give full power but with varying levels of initial throttle response. Yamaha says that changing the gearing will affect TC intervention, although this can be remedied with the kit ECU. The system uses front and rear wheel speed sensors to function. There’s also a quickshifter as standard, and a blipper is a race kit option. Thanks to LED lights, the current consumption has been reduced, so the size of the magnet in the generator has shrunk.