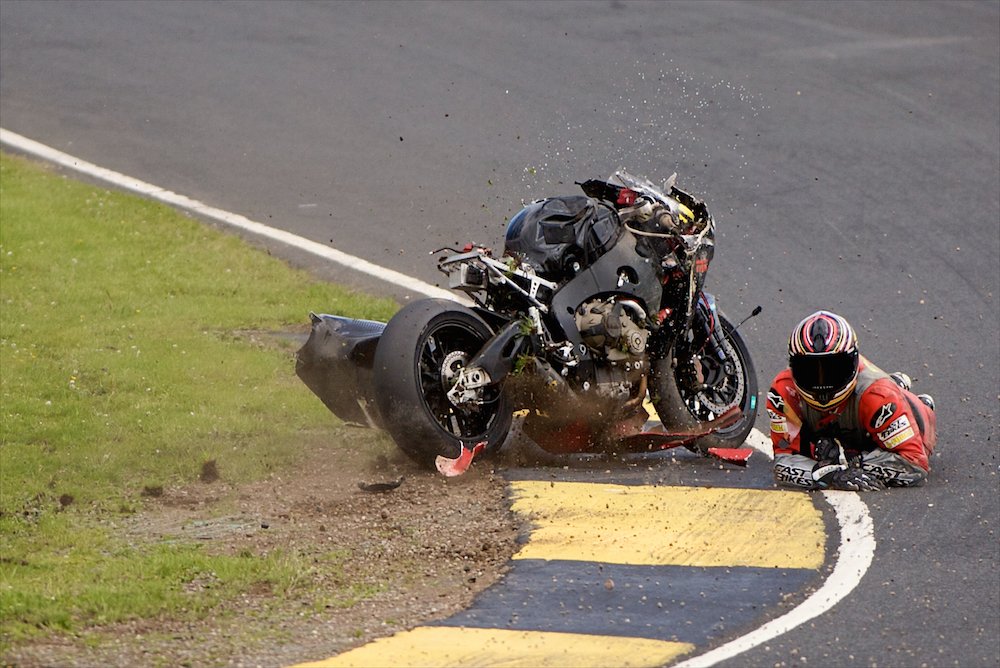 Always crash in front of the camera and smile if possible

The British Superbike circus rolled into Scotland this weekend. I should have been racing in the Ducati TriOptions Cup but was shafted so far up the botty by a ‘sponsor’, that all you could see was this guy’s toenails dangling between my cheeks. Instead, I endured Knockhill’s action on the TV and witnessed a crash-infested race one, with thousands of pound’s worth of superbike exotica strewn across the Scottish countryside.

Which got me trawling through my extensive crash archive. Six years to the day, I was on the 2009 Superbike grid on a blisteringly fast but very agricultural Honda Fireblade. 215bhp and a complete lack of electronics meant it resembled a flea riding a dog’s ball bag. Despite several decent results, I was also aware that I was doggy paddling in the deep-end with the big boys; ex-GP riders and British champions, and me…

It was qualifying and we were struggling for pace. The team decided to install a super-sticky SC0 Pirelli rear slick that would only last a few laps. During my first flying lap, the extra grip from the rear-end pushed the front on the entrance to Knockhill’s turn one, sending me and the belligerent ‘Blade into the gravel.

Straightaway I knew my shoulder was dislocated, aggravating an old motocross injury. But I was in good hands; the British Superbike paddock has one of the best medical teams in the world, with the best facilities and equipment for most eventualities. It’s a behind-the-scenes aspect of the sport that deserves more recognition.

After several futile attempts at putting the shoulder back in without hefty pain relief, the doctors wheeled in the morphine to accompany gas and air. Before too long, my girlfriend was a panda and the chief medical officer, Toby, was a horse. I was in a magical place, and after half an hour of numerous medical staff swinging on my arm, it popped back in.

The aftersales service is just as complimentary. Thanks to world-class physios, I was back on a (road) bike within a week. The ‘Blade was, as you can see, a different matter. I think the engine was the only redeeming feature. We didn’t see each other again…