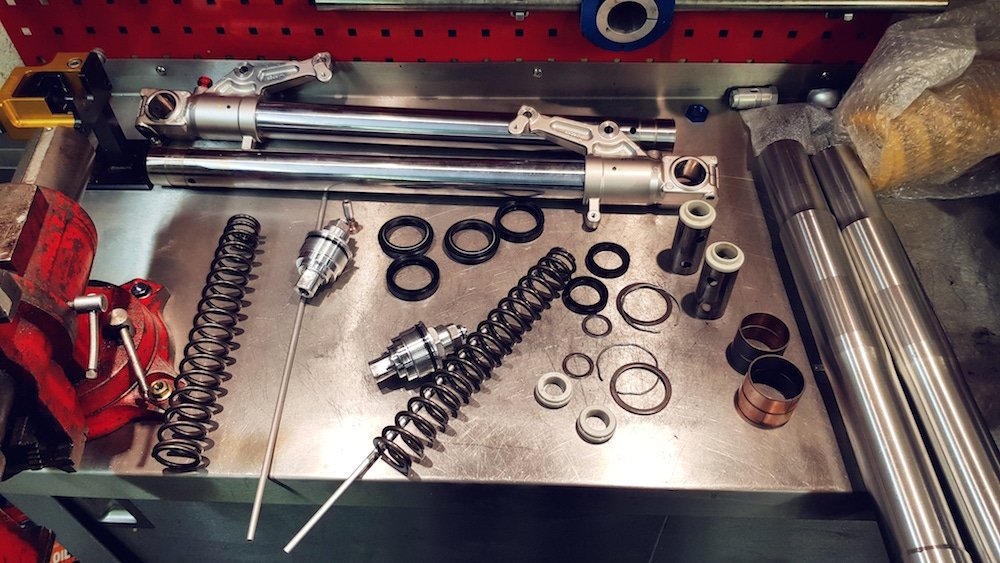 Nothing shouts success quite like riding your rolling rustbucket to Africa, which exactly what we’re doing for the ultimate Budget Bike Battle finale. Perhaps we’ll even make it back to Blighty with some TLC to the SRAD and ZX-7R. A roadtrip to Africa (well, Morocco to be precise) means serious preparation, and this latest instalment of the Budget Bike Battle is an SRAD update, filmed at JHS Racing as they have everything covered for every eventuality.

My first mod was a Skidmarx screen to replace that ghastly blue thing. For just over £50, you can’t argue that its aesthetical aspect and, being a double bubble, it should ease the pain as we trickle through Spain. The fit is perfect and even a pillock like me was able to fit one in under five minutes.

I already knew a new radiator and fork stanchions were needed, along with some basic consumables and serviceable items. After trawling the interwebs for suitable components, it was evident that buying used parts for the SRAD was a massive gamble – as with any other bike. Granted, they may be cheaper than brand-new, but the random state of secondhand bits is a game of roulette – a game I’m not willing to play when the stakes are so high.

Thankfully, I have an ally, albeit a slightly more expensive ally. Suzuki’s Vintage Parts Programme is nothing short of amazing. Setup a few years ago to satisfy the ever-growing retro market, hundreds and thousands of Suzuki parts are sitting in a warehouse somewhere awaiting your purchase. Although the SRAD isn’t featured on the website (yet), there’s still a huge amount of parts available, and your best bet is to contact your local dealer.

Little did I know that a naughty can of worms would be opened after removing the fairings, as you’ll see in the video….