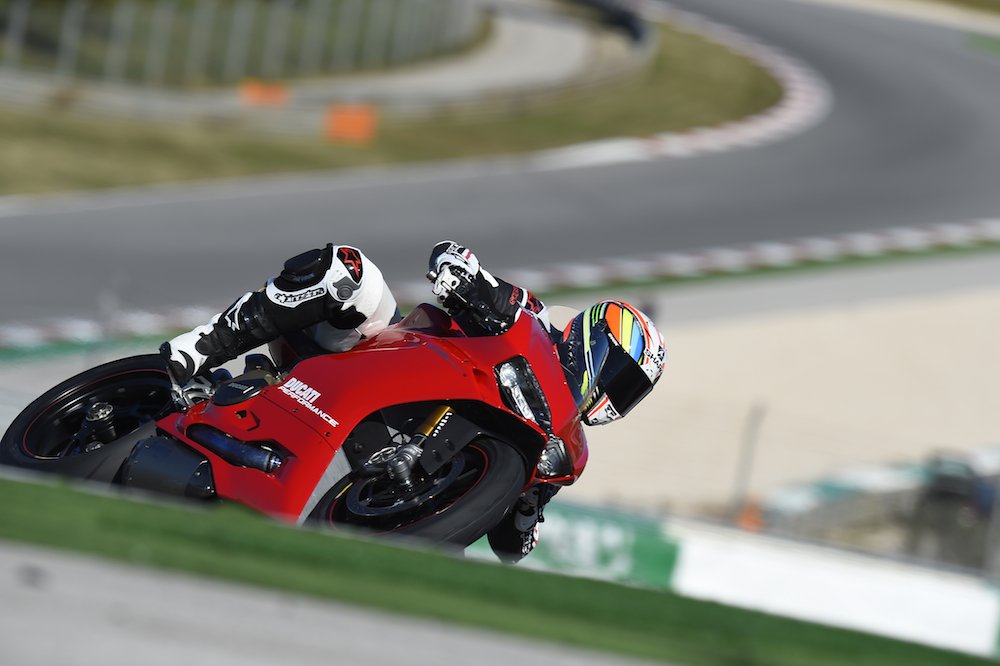 Launched late in 2011, the Ducati Panigale has always been a thing of outstanding beauty – maybe too beautiful in a fashion-over-function approach if we’re talking pure dynamics. You’d come in after a session, sweating, shaking, checking for skidmarks and ready for bed, thinking you’d broken the lap record or a PB, when in fact the 1199 was a chunk slower than its rivals. But it was uniquely brilliant.

Likewise, ridden hard on the highways was like putting your nuts in a vice and letting someone else control the clockwise-only handle: bucking, weaving and slapping its way along, which was no bad thing. Its distinctive monocoque ‘chassis’ stiffness and rigidity was enormously fun but hard graft and a little intimidating. Only racers could truly exploit it, or had the balls/skills to.

Say hello to the 1299. Ducati has screwed conformism to racing and given the new Panigale a 1285cc capacity (1299 sounds better) with a pair of gargantuan pistons. Grab a tape measure, look up 116mm, and imagine two of those puppies going banzai beneath your botty at 11,500 times a minute. If it helps you sell on Monday, why race on Sunday?

Ducati freely admits that the 1199 lacked the midrange minerals of stereotypical Desmos of old and its competition: a by-product of the insane Superquadro motor’s stats and characteristics. Chucking another dollop of grunt at the 1299’s motor – a claimed 15-18% at some points in the range – should do it. And it has. 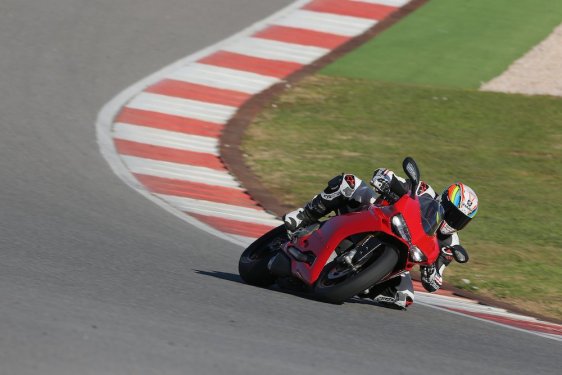 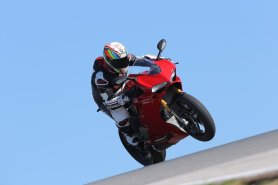 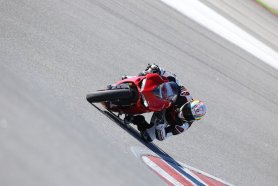 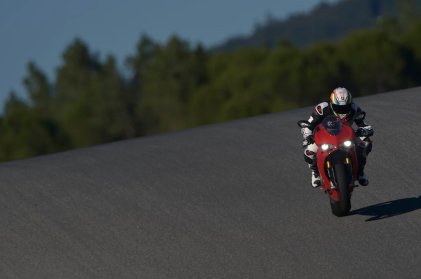 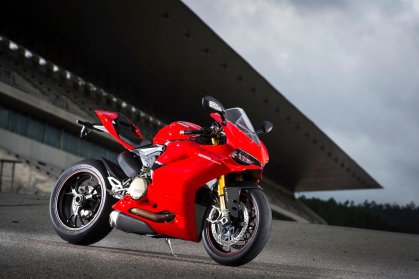 The world press shindig was held at Portimao circuit: a proper test facility with its blend of fast and slow corners, captivating ups and downs, scary blind crests and corner entries, and immense post-ride entertainment. If there’s anywhere to highlight deficiencies of the Panigale S we were riding, it’ll be in the Algarve.

It’s no surprise the claimed 205bhp power increase is immense in realtime. Everything about the unique Superquadro engine screams fury, like a bull that’s been stung on the bollocks: the power delivery, the noise, the resonance, yet you can’t help but take more throttle liberties. The slow methodology simply isn’t in the Panigale’s ethos.

The 1199’s two-stroke powerband equivalent has made way for a more linear, yet harder hitting delivery at every stage of the throttle. Internally, the motor spins just as viciously to the 11,500rpm redline, which means you still have to chuck gears at it (and the gearing is very short), but that midrange packs an addictive heavyweight punch that’ll see off most in a straight line.

The fresh energy can be found with just a whiff of gas and it surges forward with greater momentum than the 1199. We’re not just talking a slice of extra zip. It’s a full-fat portion of butt-clenching torque that’s been added. It still takes a while for the motor to catch up with eager throttle actions in taller gears and the Superquadro nevertheless thrives for top-end action. 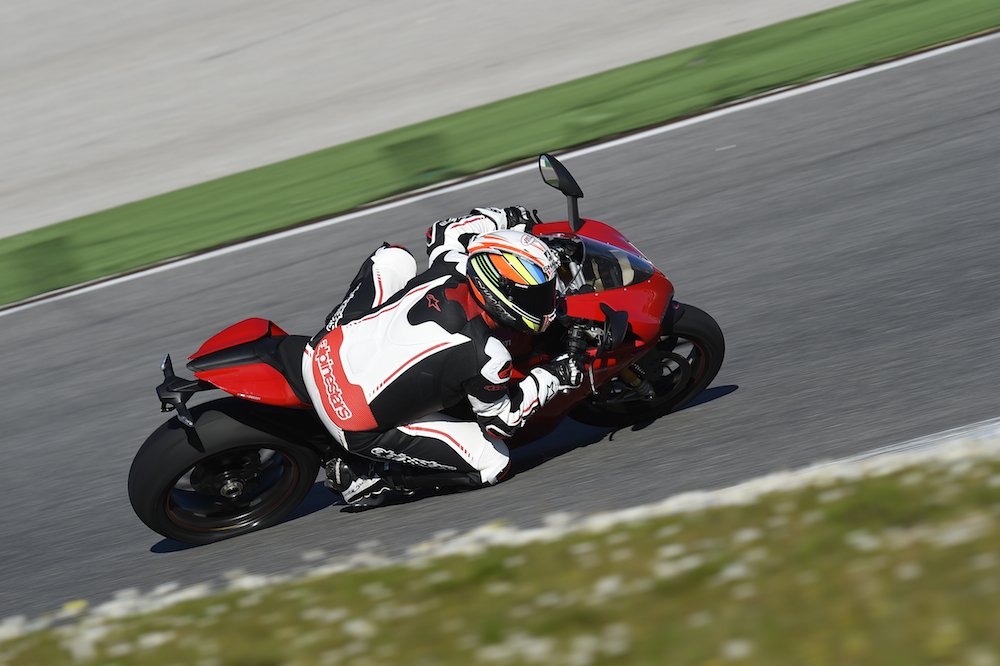 Immediately, the 1299 feels lower – my stubby legs no longer require a full stretching exercise to reach the floor. In a bid to rectify arse-end grip, Ducati lowered the 1299’s swingarm pivot by 4mm and this truly is a tangible upgrade. The rear tyre now feels constantly connected to the surface beneath, giving the traction control less work to do.

Another positive consequence to the 4mm change is stability, which has been improved in every sense. Sure, there’s an element of ‘bar waving and the Ducati doesn’t have the fastened-to-the Tarmac assurance of the new BMW, but it’s also way more fun.

Overall, it’s easier to ride faster and explore the limits. If you’ve ridden/owned an 1199, you’ll be familiar with its similarity to a stumpy scaffold pole with wheels and that lack of flex, but thankfully the 1299 feels more conventional, softer and more forgiving as you attack a turn.

Within a few laps, the 1299 was eager to push on and filling me full of confidence that the 1199 never quite managed. Having spent a few days here onboard the old ‘Gale at Fast Bikes Sportsbike of the Year, the 1299’s front-end is far sexier and willing to meet an apex, not to mention falling from upright to peg-scraping antics with the smallest of inputs. Understeer has been synonymous with Ducatis over the years but 2015 is all about the Panigale’s oversteer, especially when the engine braking is increased to assist on tucking in to an apex.

And being 2015, Ducati couldn’t join the party without chucking every available gadget and a vast array of adjustability on the updated Panigale. The Bosch IMU (Inertial Measurement Unit) allows cornering ABS (which is largely redundant on track) among other tricks.

2015’s must-have gizmo has to be an auto-blipper, and the 1299 comes complete with an epic version that’ll make you faster and look dapper. While the BMW resembles dipping your toe in cow poo, Ducati’s shift action is clinical and precise (so long as the revs are below 10,000rpm), and not once did I miss a gear. It automatically gives the Panigale authentic race bike substance. 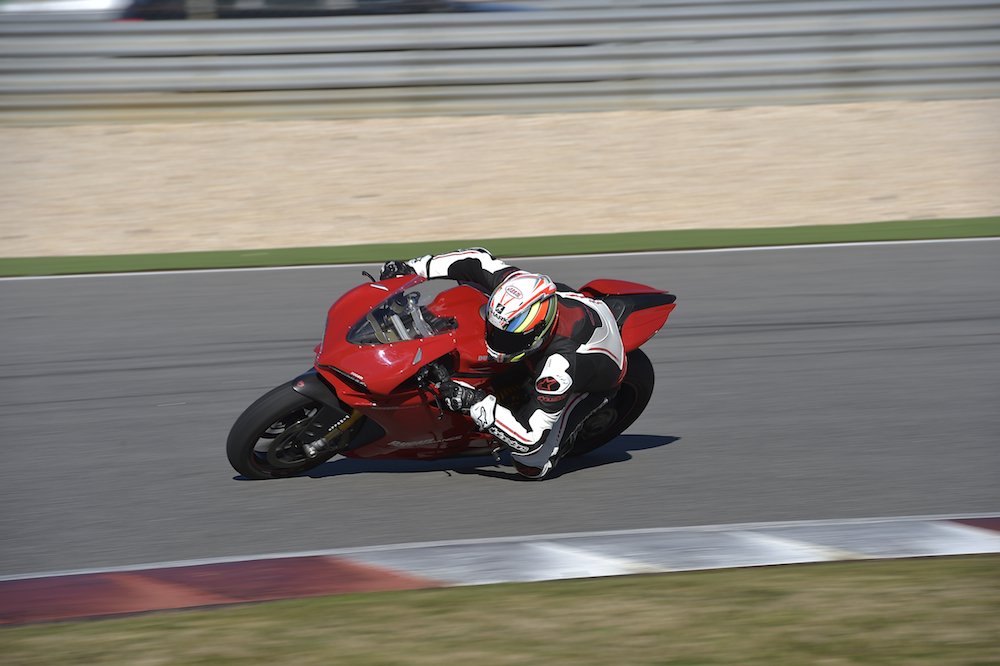 While its handing upgrades ensure it joins the dots with more fluidity and corner speed is more natural, picking the bike up and utilising the mass of grunt better suits the 1299. The bike running wide wasn’t a consequence of handing defects. It was down to carrying more apex speed and the motor inducing greater exit pace.

Those who moan about anti-wheelie making a breakthrough in modern road bikes obviously don’t like nailing fast lap times. The 1299 is hardly unrideable without the system functioning, but it tidies everything up with subtlety, although with less intrusive settings the nose still launches skywards.

Let’s save one of the best features until last: the Öhlins semi-active suspension. It differs from BMW’s attempt as the Ducati uses event-based dynamics, rather than proper semi-active changes.

The Panigale may not have the sheer bump management and silken ride of the 2015 Beemer, but I’d rather have utter confidence and feeling when committing to loading the front-end, and suffer with mild shaky toothy syndrome. The ‘Dynamic’ setting stiffens the fork under braking, softens it again for apex hugging and agility, and hardens the shock under acceleration. There’s also a ‘Fixed’ mode for conventional damping, although you won’t want to go back after sampling the Dynamic setting. Granted, we were rolling on Pirelli Supercorsa SC2s (rather than the stock SPs), but mechanical grip levels have taken a gratifying hike.

There’s no hiding from the fact the 1299 is still horrendously physical – you know when you’ve done 5 laps of Portimao trying to tame it – although you can hang on rather than wrestle, as was necessary with the 1199. The anti-wheelie has made the physicality easier but the extra oomph means holding on tighter. There’s no such thing as relaxing on a Panigale.

Being launched at Portimao, we only got to assess its track talent, but it’s pretty much guaranteed the 1299 will brag a superior road protocol. The wider spread of useable power and midrange torque, the supple chassis, and the incredible Öhlins suspension add to everyday usability. Even the anti-wheelie we’ve sampled on the Superleggera makes it a better road bike, as the throttle can be fully abused.

For those asking about practicality, the screen is 20mm higher, the pegs are grippier than before, and the mirrors are static, meaning they don’t fold in – a bit of a shitter for trackdays and transport. The 1299 also comes with an auto tyre calibration so you can run any rubber you fancy. 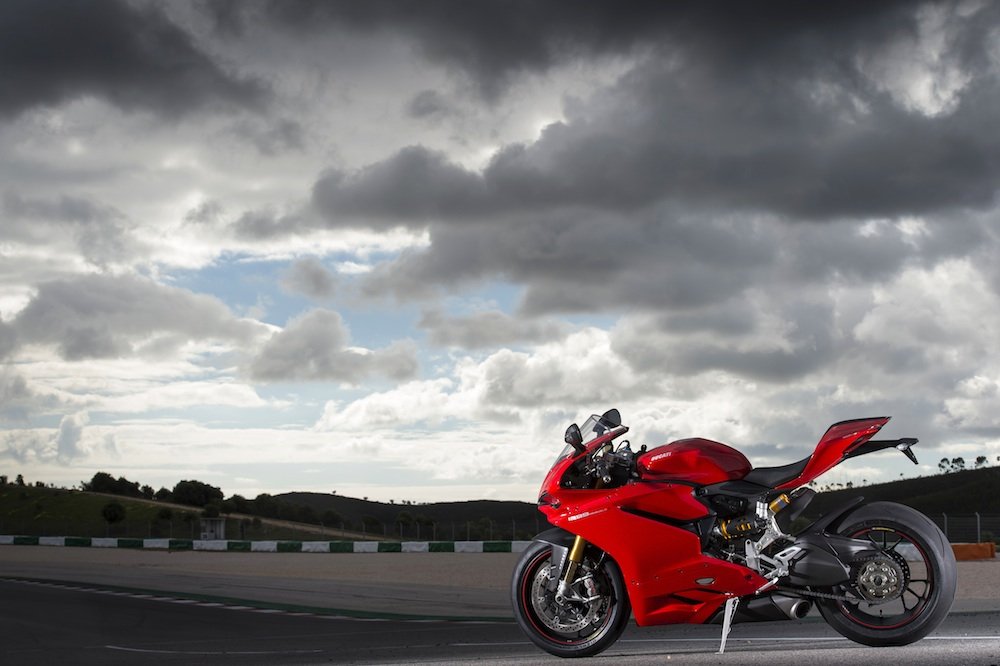 Ducati’s five principal design wishes, as talked about in the pre-ride presentation, were lightness, power, technology, design and performance.

Lightness: weighing in at just 166.5kg, it’s no wonder the 1299 is like a crisp, dry bogey, primed for flicking. Its newfound athleticism is backed up by more precise steering. 9/10

Power: the little-bit-cheaty motor is one of the most engrossing experiences known to man and should be on anyone’s bucket list. You need Michael Dunlop sized gonads to truly exploit. 10/10

Technology: with the addition of anti-wheelie, an auto-blipper, that sexy golden Öhlins suspension and cornering ABS for the road all ensure the 1299 is a true techno-queen. The electronics are every bit as good as anything I’ve tried. 10/10

Design: probably the only dubious one of the five, but still super-sexy. Why change it? N/A

Performance: overall, the 1299 is leaner, meaner, faster and more capable than before. 9/10

Comparing the 1299 to the S 1000 RR is like comparing religions: they’re completely different bikes. In terms of involvement, sheer thrills, and wanting to know I’m alive, I’d have the Panigale any day. It kicks you in the bollocks, treats you like shit, but is utterly addictive and assaults every sense you have, plus a few more in the nether regions. Whether or not it’ll be as quick as the BMW against the stopwatch remains to be seen, and it’s a shame you can’t race it.

We’ll have to wait until the end of March to find out. 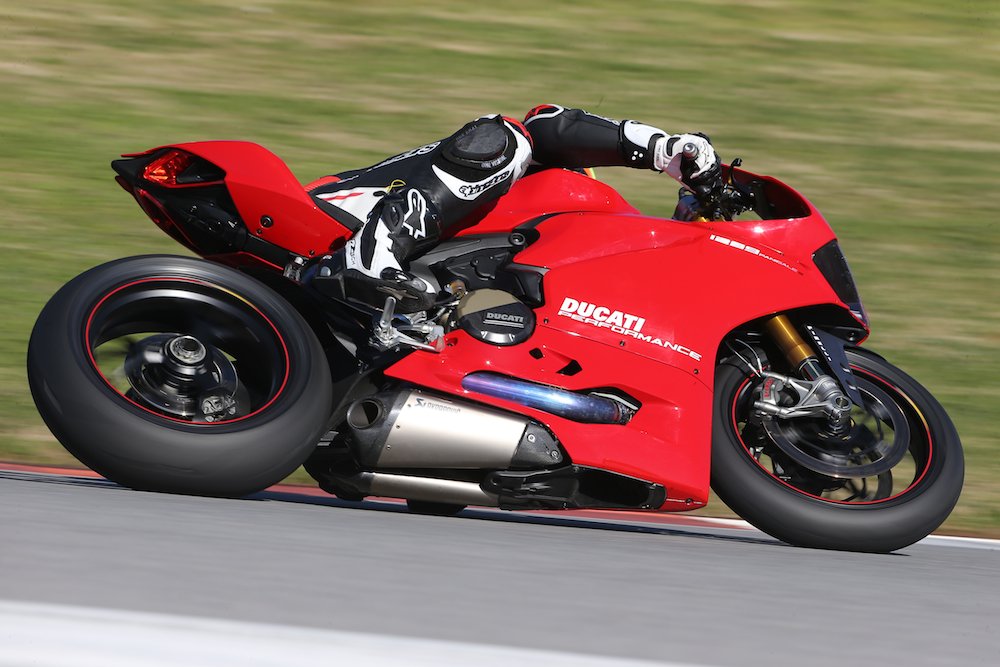 We also had a session on this ‘Performance’ version, kitted with Ducati aftermarket goodies, with the standout feature being the Akrapovic titanium exhaust system. It was loud.