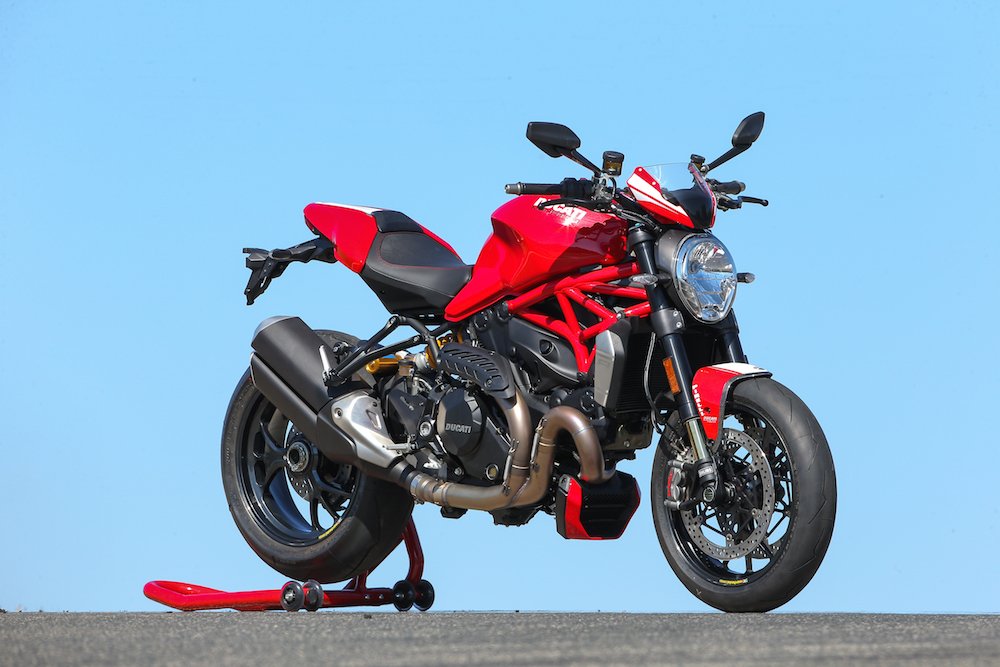 Ducati seems to think so, sighting direct rivals such as KTM’s 1290 Super Duke R, and 44Teeth was one of the first in the world to sample the goods at the International Press Launch. Launching a bike at Circuito Ascari in Spain is a courageous move: set in the Ronda valleys near Malaga, it’s a challenging 5.4km ribbon of Tarmac rich in undulations and every type of corner you can imagine, with banked carousels, off-camber bends, hairpins, blind entries, and kinky kinks taken pinned in 5th gear that routinely make your bumhole twitch. It’s the perfect testing facility to showcase manufacturers’ minerals…and highlight any flaws.

I’ve never been a huge admirer of the Monster’s aesthetics until the last major update, where Ducati instilled a hint of aggression that translated into riding dynamics – I mean, my 70-year old dad owns one, which kinda says something. The R’s styling retains fundamental Monster lines with a smattering of badass, particular that racier seat unit. 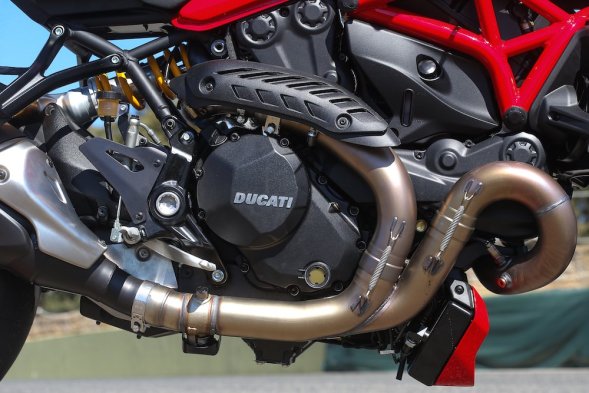 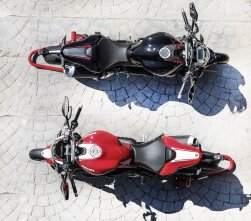 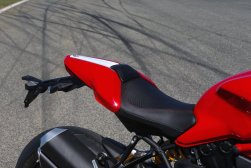 There’s always been a smidgen of fashion over authentic sporty function associated with the Monster since its inception in the 90’s, more coffee shop than pit stop. Until now. For me personally, the R’s curious aspect was just how much sporting pedigree Ducati had injected, and whether it truly deserved those R credentials so synonymous with elite Ducatis.

It’s certainly not a complete overhaul, instead a light dusting of sporty upgrades and aesthetical pleasuring. Without rehashing too much of the press kit or your finest internet researching, here’s the R’s shimmy. A dedicated, tweaked Testastretta motor packing 160bhp is the chosen powerplant, with a medley of juicier ancillaries – such as 56mm throttle bodies – to fuel the frenzy . The ‘frame’ (semi monocoque) is identical to the Monster 1200 S, with taller forks and shock length to allow more ground clearance and revel in tastier lean angles – 50 degrees to be precise, according to Ducati. Given the hype about the 1200 R being ‘designed for the track’, it was a surprise/major disappointment not to see a quickshifter (and an auto-blipper).

The riding position is unmistakeably Monster: flat, yet high-set bars luring you over the front wheel, garnished with Ducati switchgear and a new TFT-display dash that now brags a gear position indicator. Thanks to the machined pegs (stolen from the Panigale) being separate from the pillion’s, the hub of the Monster 1200 R is much thinner just below the gusset region, which also manifests into a less intrusive exhaust fouling the right boot – something that plagued previous Monsters in all guises, and one of the most common questions posed upon its unveiling. On the hoof, the R’s cockpit feels natural and intuitive. And for those freaks who relish quoted seat height stats, it’s 830mm… 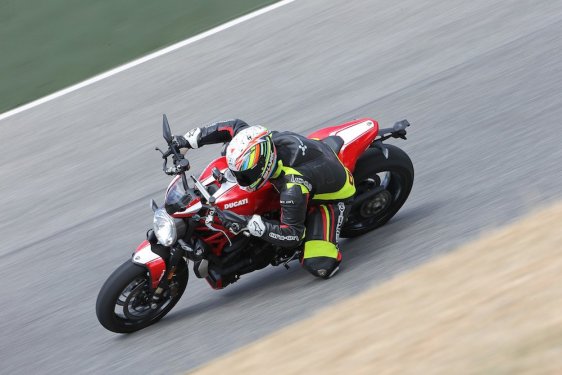 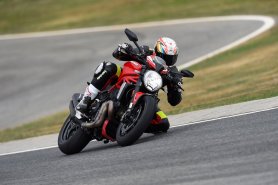 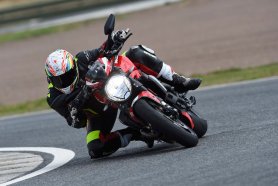 The morning’s sighting laps felt flat and lethargic, only to glance down to see Touring mode was selected – I assume for safety reasons on a cold-ish track. But these sighting laps also proved it instantly deserved supernaked status, flattering my lack of circuit knowledge with epic handling, athletic and stable. Thanks to the bars’ leverage and that inherent monster flickability, the R is super-agile with zero indication of understeer.

Ascari has been firmly on the bucketlist for a years (more on that another time) and I didn’t have a bloody clue where I was going, yet the R turned on a whim and masked any errors. It’s a bike that inspires confidence from the off, lacking quirks, scaremongering tactics or idiosyncrasies and furnishing any level of rider with stacks of mechanical grip. I was able to give it some berries very early into our relationship.

Ascari’s twisty nature meant constant throttle abuse. As with all new generation Ducats, the R’s twistgrip is super-light but direct, snappy, and supplies excellent rear wheel connectivity throughout the rev range. I’d forgotten just how smooth the bottom-end is (Ducati claim 75% of its torque is available at 3,500rpm), seamlessly forming into an excitable midrange. These early laps also underlined how punchy and free-revving the Testastretta motor can be, especially when we engaged Sport mode where the inner monster and full-fat power was unleashed. Ducati’s insistence on pushing the boundaries of twin-pot technology has resulted in a near faultless, almost digitalised execution. Well, nearly. 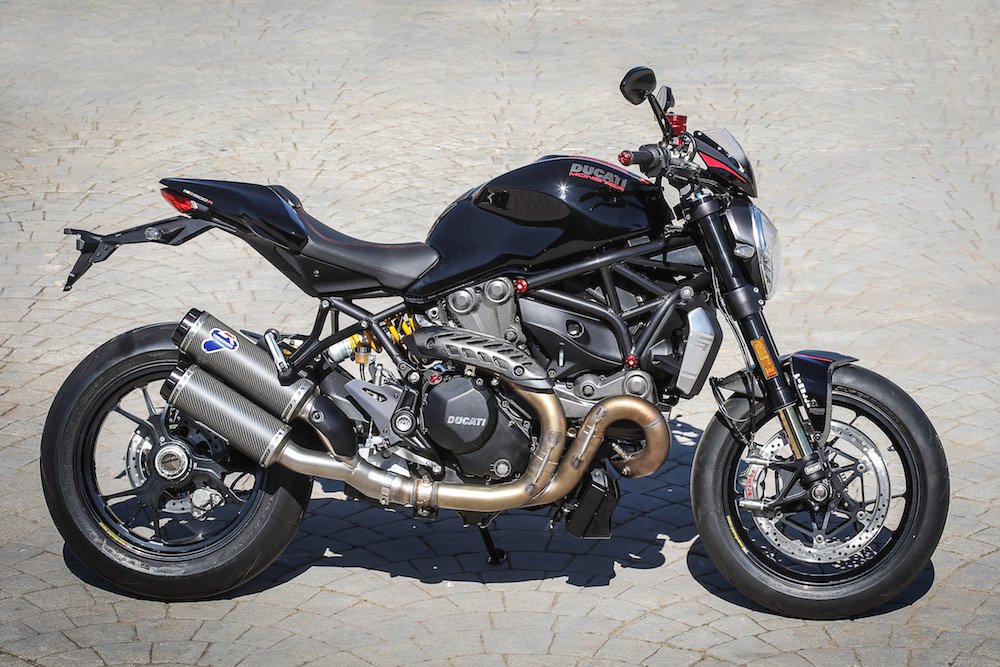 There’s a part of me that’s slightly disappointed by the lack of DVT (Desmodromic Variable Timing) engine debuted in the Multistrada. Ducati’s project engineer told us that surplus weight of the DVT trickery was a major contributing factor as to why the Testastretta was utilised.

It took me several sessions to fathom there was something missing, something lacking from the usual Desmo riding sensation. As grunty and involving as the Testastretta motor is, bastard new Euro 4 emission regs are to blame for the much quieter, more serene exhaust noise. Even the engine internals are treated to trim engine clatter and the induction bark isn’t as riotous, like going to a rave without any bass bins.

Honestly speaking, the 1200 R could do with another 10bhp, just to shit you up like an archetypal supernaked should do. There’s a wide spread of serviceable shove, although it starts to make suitable sense at 6,000rpm – as the TFT dash suggests – and it continues to harvest the goods right until a grand before the redline. But there were no banzai, uncontrollable power wheelies, nasty shakes or shimmies, rip-your-arms-off corner exit skulduggery and, generally, nothing to upset the chassis despite tangible provocation. Maybe the Monster is a bit too nice?

There’s one of those aforementioned bumhole-twitching kinks halfway around Ascari. Monumental gonads and just as monumental skill levels could see you attack it pinned in 4th gear, although, lap after lap, the throttle needed rolling slightly to provoke weight transfer onto the Monster’s nose. The R blazed it, railing through with unhealthy measures of stability but struggled to make full use of the imminent 5th gear upgrade, feeling slightly inadequate in the trouser department. That said, just how many R owners will be berating terminal speed and top gear performance at a trackday? As the day wore on, taller gears were being used to manipulate the R’s bulging midrange. 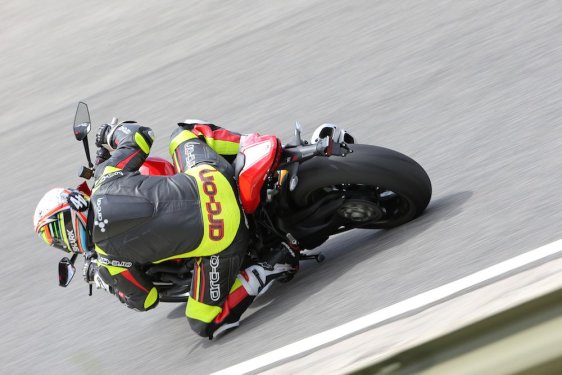 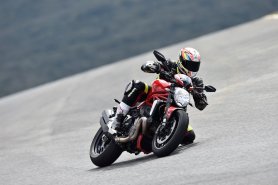 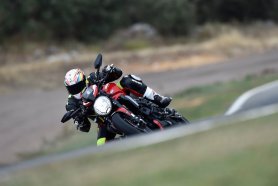 As the sunshine threatened to make a lasting appearance and my pace was getting more committed, it soon became apparent this was no Aprilia Tuono with superbike-type cornering nirvana at the ready. Granted, ground clearance has been vastly enhanced over previous Monsters, but that didn’t halt sidestands, exhaust valve covers and even the odd gear lever making sweet love to Ascari’s track surface. And very much like a Super Duke R, it’s not the most stable under severely swift changes of direction, though far less sketchy than the KTM.

Back to the positives, and the Monster scarpers into a turn with enthusiasm, relentlessly dancing lightly on its springs poised for your next input. Again, very much like the Super Duke R, it can often feel hesitant to complete turn-in on the brakes and doesn’t exactly welcome heaps of trail braking. Despite being electronically deficient in corner entry strategies, the R was never too sacrificed, making light work of Ascari’s multitude of braking zones. Brembo M50s bolted to the 1200 aren’t as fierce as bikes decked with identical kit, but superbly progressive – maybe working in conjunction with less focused suspension. And it’s not often I leave any ABS system operative on a track through fear of unnecessary intervention and running on into a turn, although Ducati’s latest spec’ system is nothing short of stunning. It was akin to a computer game, comically braking as late as possible and letting that little black box do all the grafting. 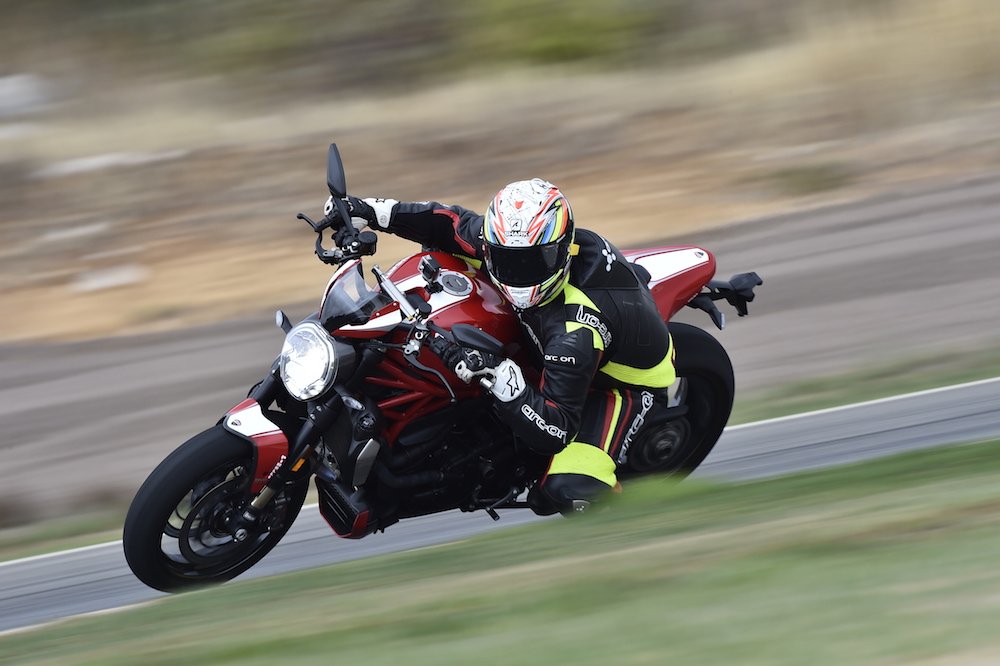 Standard set-up is on the soft side of plush, and requires dialling-in extra damping support for track sorties. Additional rebound and compression that was recommend by Ducati test rider Alessandro Valia provided another notch of mid-corner stability (its finest hour) and willingness to hold a line. The whole circuit was flowing with consummate ease, connecting the dots and working the Supercorsa SPs with more vigour.

With grip levels diminishing as the tyres received a drubbing, still nothing could distress the R. Pirellis are renowned for a sludgy impression when past their best, though Ducati’s DTC traction control felt perfectly capable on level 3. Ascari’s onslaught of constant tyre sidewall exploitation was subtly tidied up with any fatigued throttle inputs, goading unfathomable amounts of gas.

Regardless of its (sometimes irrelevant) track-induced faults, the Monster 1200 R is a cinch to ride. Having spanked it round one of the most physically demanding circuits in the world without a whiff of arm-pump and still able to leap off without looking like I’d been rogered in the botty, it’s a package delivering nothing that’s surplus to requirements, responding best to calm contributions. All this equates to a peachy road bike, which we’re sure 90% of its future activities will be based in such environments. 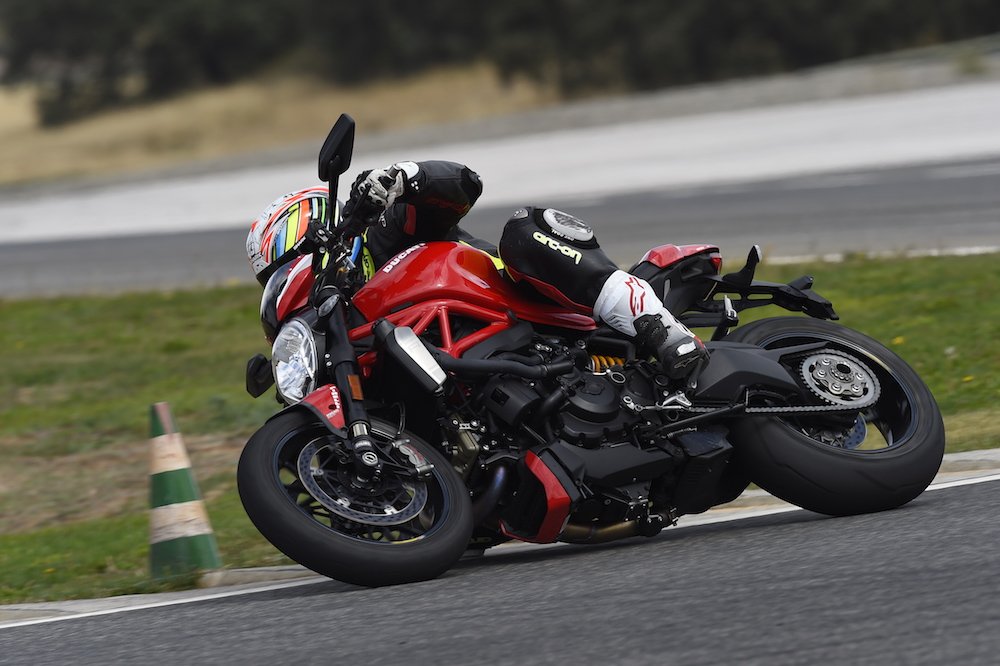 For those enquiring about its place in the ever-growing supernaked division, the Monster 1200 R is no Aprilia Tuono. Then again, it’s a bespoke naked, not a superbike with minor mods and downgrades. It’s every bit as sharp as a Super Duke R when it comes to cornering but lacks the hooliganism and sheer brute power of the KTM – then again, it doesn’t own a gearbox made of gorgonzola. It’s far more involving than the dreary BMW S 1000 R, though once again is bereft of the Beemer’s outright power.

At £15,250 (for the red, you’ll have to add another £200 for the black), the R is also extravagantly priced in comparison to these rivals. Lower down the supernaked spectrum would see the Monster 1200 R annihilate lesser adversaries like anything to come out of Japan or Triumph’s Speed Triple R. For stalwart Ducatisti, it makes beautiful sense. It’s almost a gentleman’s supernaked, refined and civilised without the almost prerequisite brutality of counterparts. In many ways, it fills a niche in the market.

Ducati was hardly going to punt out a howler. The sadistic chromosomes in me are a little disappointed (not angry) with this sportier Monster’s absent superpowers of other fabled R models, but could this leave room in the range for a naked Panigale?