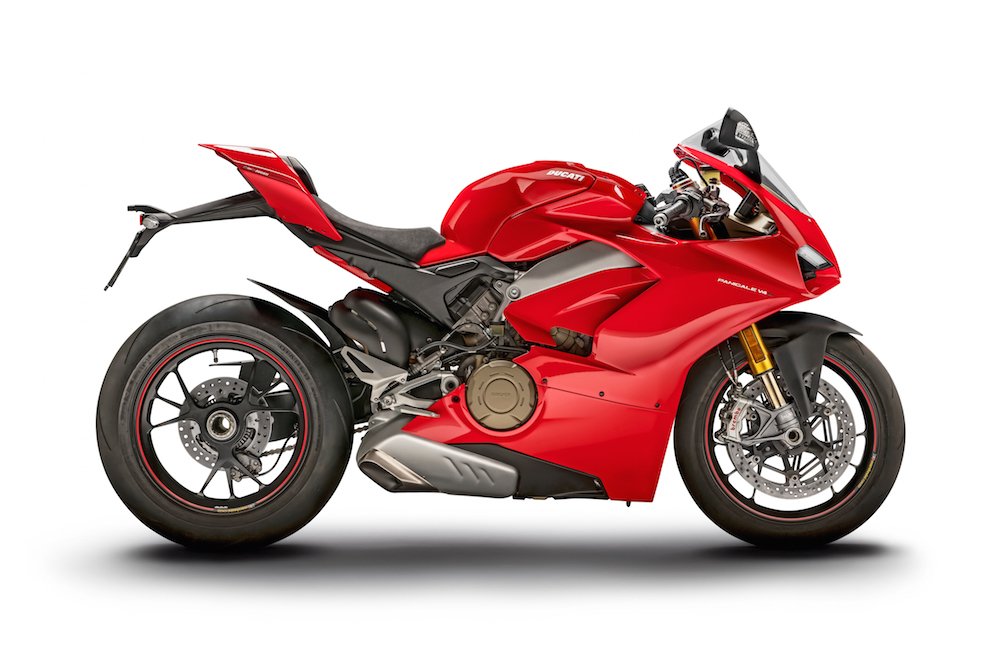 Months after unveiling the Desmosedici Stradale engine, the wraps have officially come of the entire Ducati Panigale V4 in Milan. Or should I say V4s as, unsurprisingly, there are three of the beautiful buggers up for grabs, brimming with the latest Gucci technology: the base model Panigale V4, the S version, and a limited-edition ‘Speciale’ that’s clearly aimed at affluent trackday pilots.

The major news is that 1,103cc V4 powerplant housed in a tweaked Panigale chassis, which utilises Bologna’s Desmodromic valve system, twin pulse ignition and a counter-rotating crank (very MV Agusta) that should liven things up somewhat. Churning out a claimed 214bhp at 13,000rpm with the same 81mm bore as Dovi’s MotoGP prototype, Ducati says the power-to-weight ratio is a class-leading 1:1. It’s also the biggest bore in the supersport segment – no shock given the cheaty cubes. . With a redline at 14,000rpm and an astonishingly high compression ratio of 14:1, the V4 also uses a variable inlet system (a first for Ducati). But check this: with the optional titanium Akrapovic exhaust fitted, the V4 will produce 226bhp. Wowzers.

In order to accommodate the new engine and its extra dollop of horsepower, Ducati has added a ‘front frame’ to the monocoque arrangement which weighs just 4.4kg. It’s now a semi, not a full monocoque, and attaches to both cylinder heads. This allows torsional and lateral rigidity to be separated and optimum chassis tuning. The swingarm is still fixed directly to the rear of the engine, a la 1299.

The V4’s rake remains at 24.5 degrees but trail has been upped to 100mm (previously 96mm on the 1299), and the new Panigale has been salad dodging, now with a claimed kerb weight of 195kg – the dry figure is now 174kg. To offset some of this extra timber, the fuel tank is now 16L (place your bets for fuel range) and is made from lightweight aluminium, sitting further back in the bike and under stretching further under the seat. The space previously occupied by gas is now a home for the smorgasbord of electronics.

Other chassis highlights include new Brembo Stylema Monobloc calipers, which are the latest development from the ball-busting M50s. And there are new Pirelli Supercorsa SP tyres, which are being debuted on the Panigale V4 and feature an SC2 shoulder compound, a resized rear hoop and a few other updates. 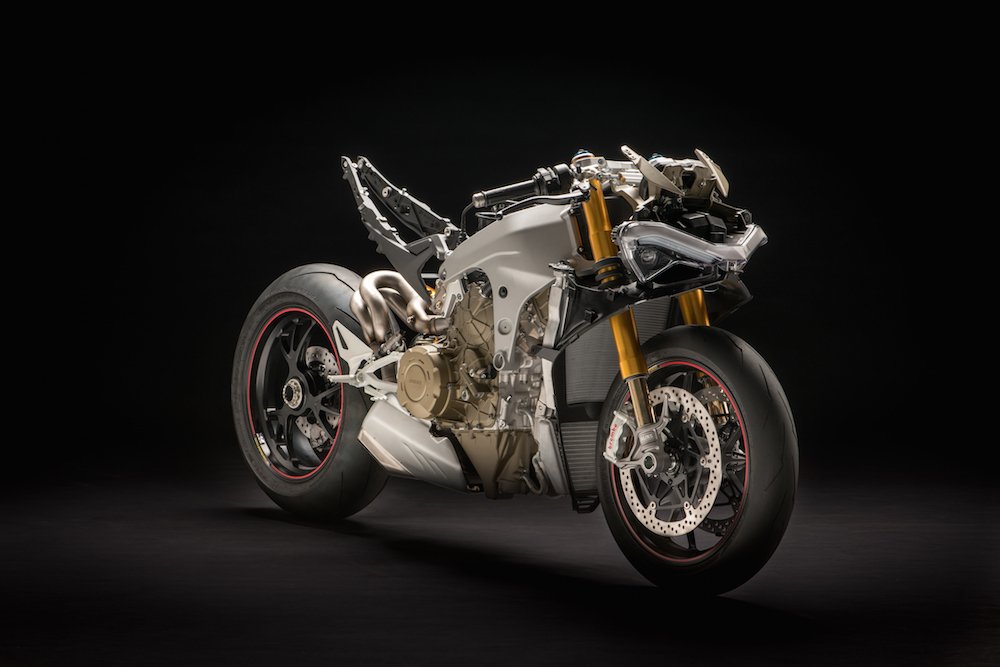 The limited-edition Speciale (only 1500 being built) is a jazzed-up S model with a host of lighter, go-faster goodies such as carbon fibre mudguards and adjustable rearsets, and weighs 10kg less with all the bolt-ons fitted . You get the full titanium Akrapovic exhaust (so 226bhp), a racing screen, and Ducati’s Data Analyser among other track-focused nuggets. Oh, and an Alcantara seat.

The launch is in January and they’ll be hitting dealers soon after. We’re nursing chubby ones till then…