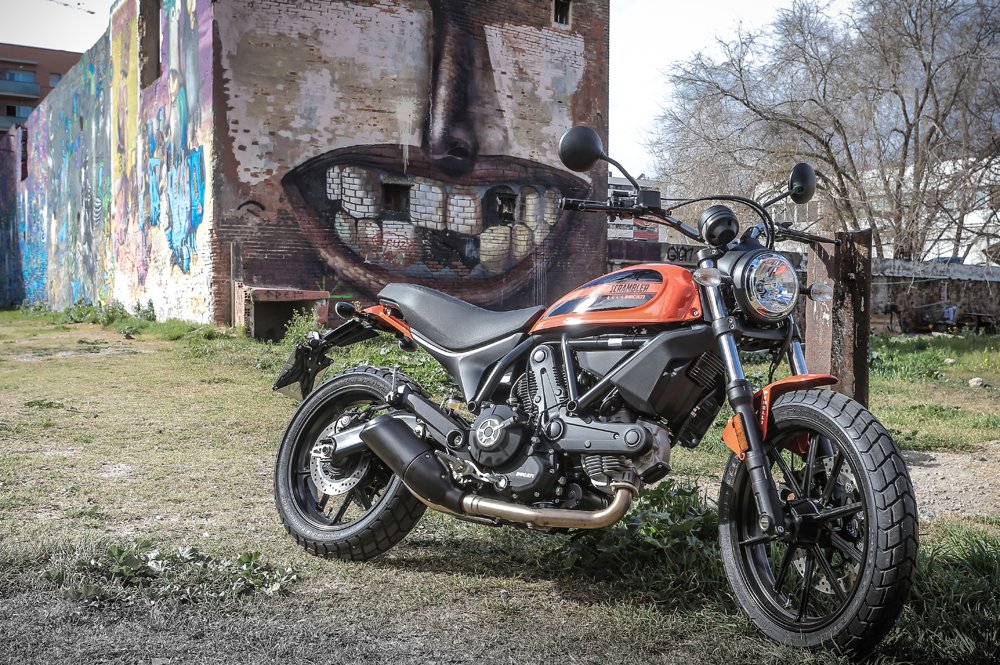 Love them or loathe them, modern retros are currently booming. Some major manufacturers are even declaring the segment as priority and, while the hipster fashion over function theme isn’t everyone’s cuppa, the scene has opened motorcycling to a broader audience.

Ducati unveiled the Scrambler brand-within-a-brand at the end of 2014 in a bid to attract a wider spread of Ducatisti and those without a biking history – hence the lifestyle marketing guff and ‘Land of Joy.’ It worked, selling over 16,000 units last year ensured Ducati made the top-ten of 2015’s best-selling bikes over 500cc. A first for Bologna…

We packed our skateboards, beards and other generic lifestyle props for the launch of the Scrambler Sixty2 in Barcelona: beautiful sunny Barcelona, where it hadn’t rained for 100 days…until we arrived. Despite some preconceptions, the Sixty2 has bugger-all to do with displacement or claimed power – the 399cc v-twin churns out a claimed 41bhp and its title takes heed from 1962, the year of pop art and flowers and shit, and Ducati’s first Scrambler, apparently. With outright performance hampered by class restrictions, buying decisions are usually established by cosmetic preferences. Until now, there hasn’t been a genuine modern retro available for the A2 brigade, and we soon fathomed that the Sixty2 is way more than a styling exercise. 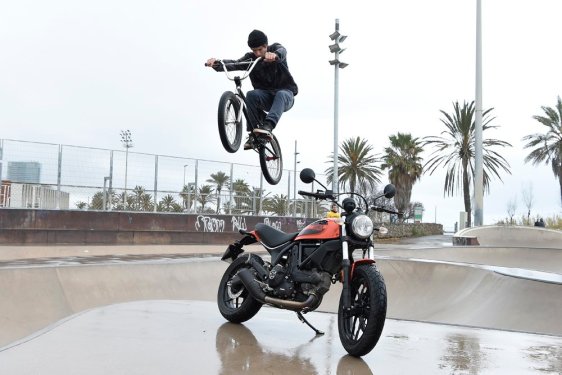 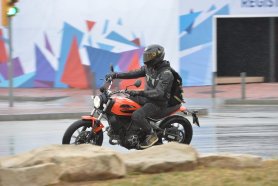 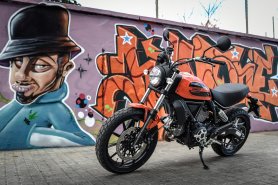 Less than a few blocks of Barcelona unearthed the Sixty2’s robustness and meaty presence. The A2 category is brimming with feeble, budget, sparrow-limbed shitters that provide the yoof/less experienced of today an affordable route into biking, although the majority threaten to self implode with a whiff of abuse – a prerequisite reserved for bikes built in the far east. There’s a genuine big-bike substance to the Ducati that we’ve yet to sample onboard its rivals, belittling its place in the market.

Bikes of this ilk tend to brag short gearing to offset lack of power, artificially heightening acceleration. The Sixty2 is gratifyingly diverse, blending grown-up gearing and a sumptuous flat torque curve that keeps on giving with a beautifully linear delivery. 41bhp, on paper, sounds about as much fun a night out with [insert your most-hated MP here], although there’s enough poke in the engine to quench the throttle thirsts of more experienced pilots. We found making the most of its midrange grunt and chucking gears in proved beneficial, rather than chasing the largely pointless and vibey redline. Ducati has also managed to preserve a decent soundtrack that doesn’t replicate a wet fart/sewing machine combo, despite halving power and conforming to Euro4 regs. Incidentally, the aftermarket Termi’ can looks naughty… 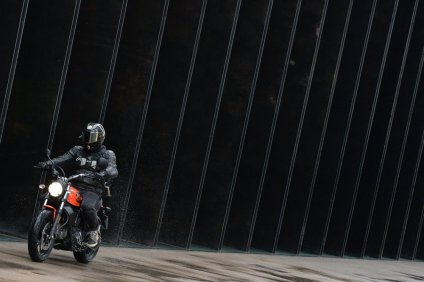 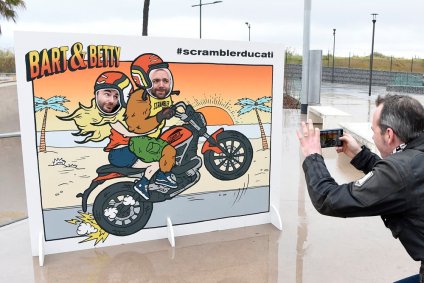 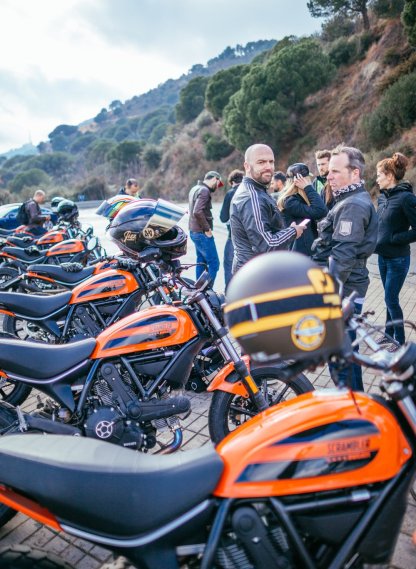 90% of the launch miles were spent trundling through the streets of Barcelona, frequently halted by the glut of traffic lights. The Sixty2 proved faultless on pretty much every level: ridiculously easy to ride with seamless ability, light and agile, gliding over any detritus on the road and fun to spank. Oh, and ambient heat from the air-cooled engine warming our damp gussets.

Switchable ABS was a blessing on shitty surfaces and is refined in function, again more sophisticated than lesser spec rivals. The clutch is surprisingly heavy, which only became an issue during the latter stages of the day, and some lamented a slightly snatchy throttle at certain revs, although I experienced nothing but faultless fuelling and ride-by-wire. A downside to the tall gearing was the lack of gear indicator, particularly pulling away from traffic lights in second/third cog. Other boring but positive traits include unflappable mirrors. Granted, they look like they’ve been jacked from the 1980s and they’re a tad close to the ‘bars, but they simply work. Luncheon and a few cheesy activities aside, we spent the majority of the day in the Sixty2’s saddle and only the last few miles provoked a numb botty.

There’s a satisfying and exaggerated weight transfer towards the nose when closing the throttle, abetting quick steering and assurance. The first half of the fork’s stroke is very soft without compromise and provides that epic ability to chew any surface beneath, while the shock plays the perfect partner. Weighing 3kg less than its bigger brother at 167kg, the Sixty2 is a doddle to chuck around and never becomes intimidating. 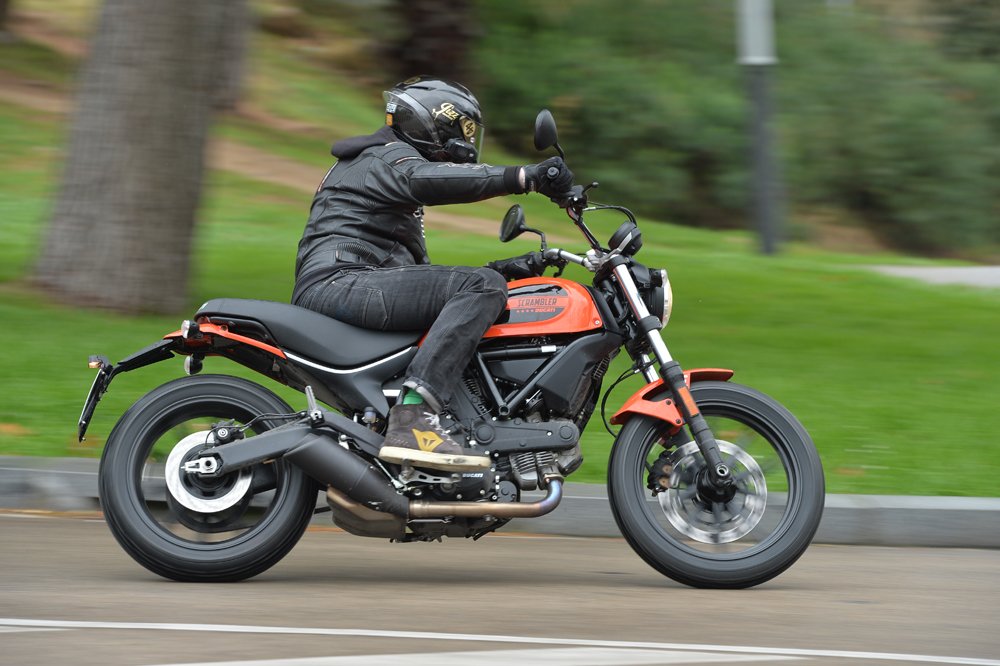 A brief soiree onto some mountain roads just outside the city was a chance to stretch its legs and reach mind-numbing speeds in excess of 50mph. In all seriousness, the Sixty2 will contentedly cruise at just above legal speeds without too much grumble. The mountain roads were also a chance to assess its handling capabilities and it was then that the Sixty2 truly astonished us. With roads greasier than a greasy thing in greaseville, it remained resolute and offered silly amounts of mechanical grip. Baron and Ducati’s test rider left me in a trail of beards, and hanging off could well have displayed kneedown potential. Of course, with its ground clearance issues, the mini Scrambler will never threaten more focused naked bikes, but we weren’t expecting such aptitude and an unwavering planted stance.

The entire package is another level of Gucciness for the learner division. As well as the aforementioned, trivial aspects like engine-braking control and downshifting stability set it apart from shoddier machines. Considering its target demographic, the Sixty2’s principal advantage would have to be its blend of simple requirements and fun factor, plus the added bonus of not falling apart like an undercooked cake.

Is Ducati’s offering the missing piece in the A2 puzzle? I very much doubt it’ll have the same impact as its bigger brother. Personally, I think we need to look at the bigger picture when it comes to getting younger folk on bikes. Those magical two-stroke-infested days of cluttering town centres and ‘socialising’ on two wheels are well and truly finished. Preventing kids from snorting plant food, horse tranquilisers and the assortment of awesome drugs these nippers have at their disposal would be more prevalent, rather than forcing irrelevant marketing down their throats, but that’s a completely seperate social concern.

At £6,499, the Sixty2 is extortionately priced compared to virtually all of its rivals and will no doubt limit sales, but let’s not forget that it’s also built in Bologna. Even the über patriotism of BMW has been surrendered in the name of economics for the German’s G 310 R, which is manufactured in India. Given its price tag, sturdiness and premium status, the Sixty2 may not be an obvious choice for younger clientele, though it’s literally in a class of its own when it comes to A2 options.