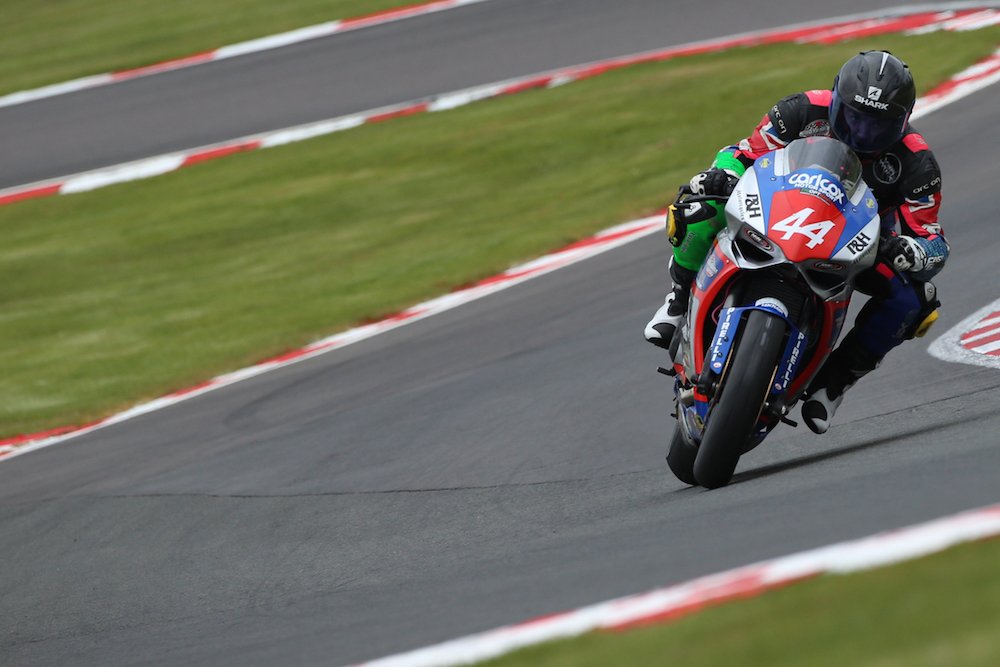 I’m almost certain a dog poo sandwich seasoned with semtex and barbed wire would have been tastier than the weekend I’ve endured. The second round of the Ducati TriOptions Cup rolled into Oulton Park alongside British Superbikes and, while it was generally a good meeting for my P&H Motorcycles/Carl Cox Motorsport team, it was another mentally challenging few days aboard the #44.

I’ve never gone well at Oulton. The picturesque circuit is joyous to ride and soak up the scenery: it boasts some thrilling, uniquely brilliant corners and undulations, encapsulating the archetypal classic UK track in all its 2.69 mile format, but results have never gone my way. Why? I don’t know…

After a reasonably successful test at Oulton a week prior to the race, we should have had a head start. But our free practice session was an utter waste of fuel, as constant light drizzle prevented any meaningful saddle time: too dry for wet tyres, too moist for pushing on.

Qualifying later in the day brought the forecasted rain. Bearing in mind the fastest superbikes in the session before us were lapping Oulton in 1m53s, and the race-winning lap by an 899 in last year’s race was a 1m49s in similarly wet conditions, caution was initially heeded. 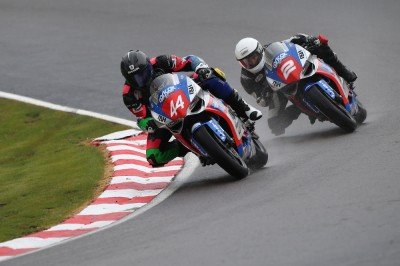 When I say initially, I meant nearly a lap. I left the pit lane with my team-mate, Dennis Hobbs who set off like Rik Waller was chasing him down with a lubed, uncut salami. Given the cold track temperature and greasy surface, it wasn’t a surprise that the first few corners felt like ice but the tyres soon started functioning. Having managed to race a whole season without crashing (and winning the 2014 championship), it was, however, a surprise to see Dennis launching it on the exit of the final turn and breakdancing towards the Armco.

Meanwhile, it was like an elderly pensioner was riding my bike. The fact that last time I rode this bike in the wet, this happened (twice), it understandably took a while to get into any sort of rhythm and gain confidence to push. My other team-mate, Leon Morris came blasting past and I attempted to follow. The next lap at Clay Hill, about two-thirds of the way around, I clicked fourth gear and the lever went all flaccid. Thanks to the tow from Leon, I knew the lap was much faster than my previous feeble attempts, so carried on and limped home stuck in fourth cog, slipping the clutch on the exit of the final turn and hitting the limiter across the line.

It turned out to be a 50p bearing connecting the shift rod to the rearset that had failed. With half the session still remaining, I watched myself drop down the timing screens and ending 23rd on the grid. Somehow, Mark Cheetham blagged pole position: ‘Cheets’ is a man who highsided on his own water left in his bellypan during a dry morning warm-up session last year, so to see him at the sharp end is, erm, good. Marty Nutt bagged second, while Leon completed the first row.

Thanks to the church break every Sunday, there’s no track activity until midday at Oulton. This meant a very relaxed day until the first race of the weekend at 5.30pm, and the sun did shone. With virtually zero dry track time for most of the grid, it was a set-up and gearing gamble across the board. We found a good setting with 14/46 (standard is 15/44) and a softer ‘8’ spring in the Öhlins TTX shock at the test, but was still a second off my pace from last season. 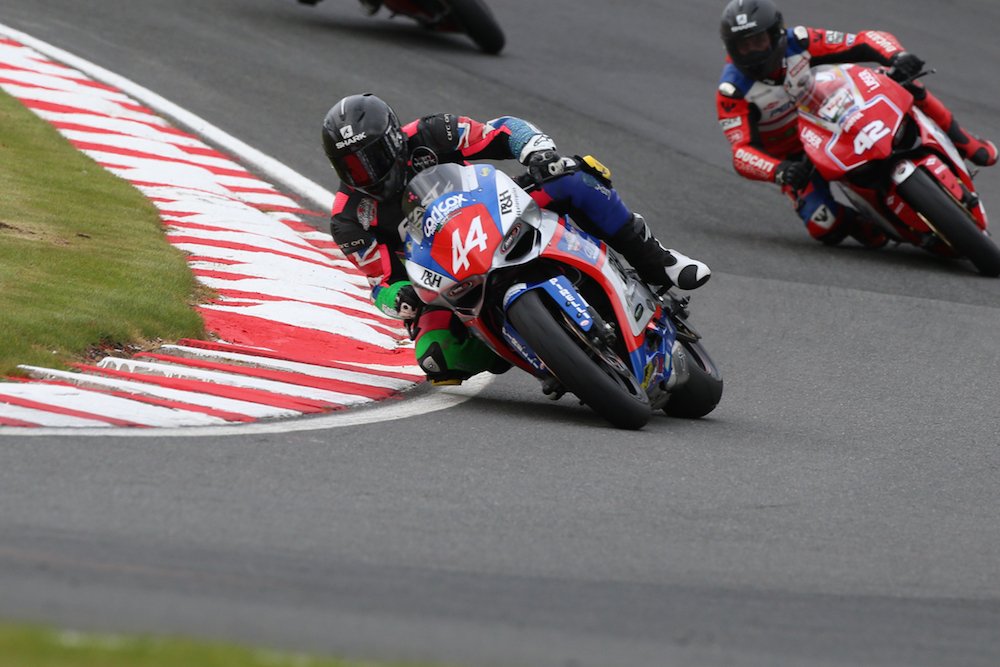 The race? I could just sum it up with, ‘meh’. Starting from where I was, I had a better view of the nearby city of Chester than the lights. The only way of launching these baby Panigales is holding the throttle at around 4,000rpm and dumping the pernickety hydraulic clutch. Any higher revs and further clutch molesting only sparks a kangaroo impression.

The first few laps were like being back at primary school playing football: absolutely no race etiquette and every rider going for the same patch of Tarmac, heroic moves at all corners. I snuck just inside the top-20 but struggled to make anymore passes with a braking issue – lever back to the ‘bar job. Given my lousy position, very little hope of points, and the need to get further up the grid for the next race (which is determined by fastest lap time), I dropped back for some clear track but backfired. Trying too hard and making mistakes, I ran on twice at the chicane and finished 25th.

At the business end, it was a three-way dice for supremacy. Leon Morris, Rob Guiver and Marty Nutt exchanged a few blows, including a tasty move by Morris on Guiver at Hizzy’s chicane that turned out to be the race-winning pass. After a tough opening round without a podium, Leon has recaptured his racing mojo and is looking sharp again. Also worth a shout is Dennis Hobbs’ effort: starting 37th on the grid, slicing through to 11th on the first lap and finishing 5th, utterly belittling my work! 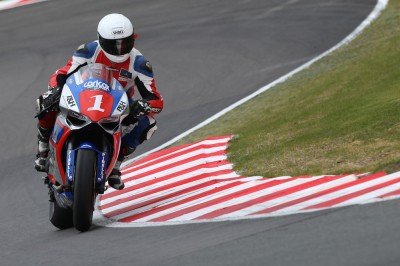 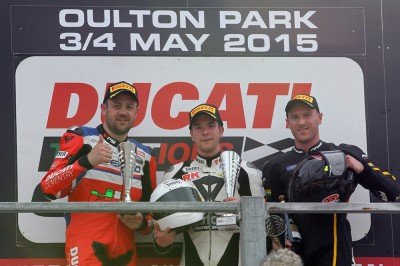 Racing is driven by confidence. Considering I was in with a shout of podiums last year and running with guys who are finishing top-5 this season, my head is completely fucked. I have a better, faster, improved bike and there’s seemingly little reason to be two seconds slower than 2014. Thankfully, I have the best team in the paddock around me and there’s only one way forward.

In many ways, I was glad when BSB race direction postponed our second outing after Sean Neary’s 899 jizzed over half of Oulton during the sighting lap and required a major clean-up operation. This means we’ll have three races at the next round, which is held at Donington Park World Superbikes in a few weeks – a GP-style track that I thrive on. 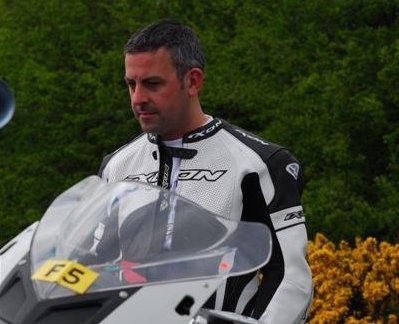 As we were packing away, I received a call informing me of the death of a colleague and good friend. Aidan Lynam was a respected and hugely liked bike journo over in Ireland, with an infectious personality to match his humour and a permanently embedded grin. Over years of press launches and trips to his homeland, we spent many nights getting kicked out of bars and blasting expletives at each other. Having a daughter with Down syndrome, Aidan dedicated his life to working with DSI (Down Syndrome Ireland), helping to raise over €1.6 million for charity. During the annual DSI ride-out that he pioneered, Aidan was involved in a collision with a car and succumbed to his injuries. Rest in peace mate. I’ll get that podium you’ve hassling me for! X