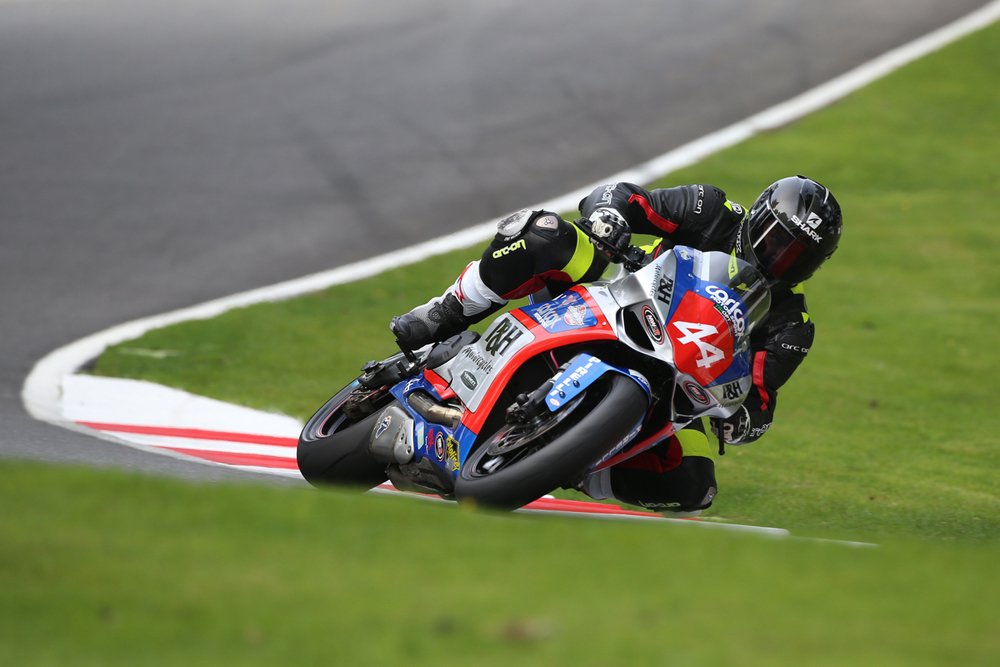 British Superbikes at Cadwell Park is always a special occasion. 40,000 race fans – most of them pissed for the entire weekend – crammed into the Lincolnshire valley create a festival-type atmosphere, and not even the Bank Holiday date change could scupper the annual party in the park involving the Ducati TriOptions Cup.

Last year at Cadwell I bagged a brace of 6th place finishes and posted some half-decent times. So, although I’m not a massive fan of the place, I was looking forward to being back on the #44 P&H/Carl Cox Panigale and getting stuck in. Having missed the last round at Knockhill due to funding issues, I hadn’t even sat on the bike since May. During the first few laps of free practice on Friday, the 899 felt alien: like I’d jumped on one of those dogs that’s had its legs amputated and replaced with wheels. I think they’re called wheelbarrow dogs.

Ending the session in 18th, the excuse book was already at hand. Cadwell is all about compromise when it comes to set-up. You obviously need grip but getting the bike turned through the nadgery sections is also essential, and something I was struggling with. The natural reaction is to make the front-end softer or make the bike nosier by lowering the front, though neither would work. Instead, we added some preload and ride-height to the shock to alter weight distribution. 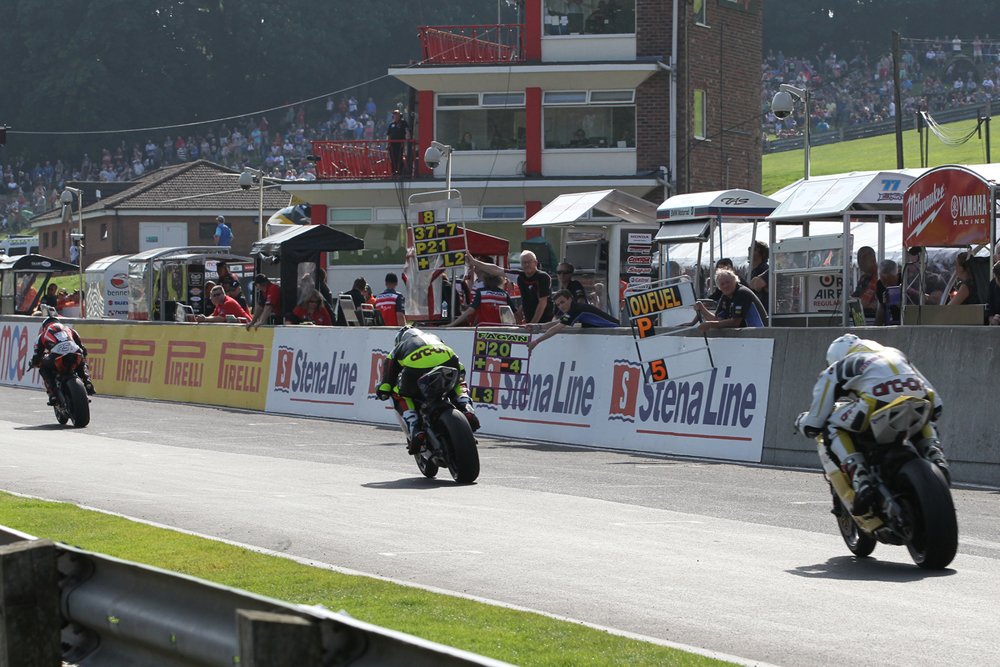 Qualifying was a dismal affair, ending 24th and left bashing my head against a wall. When you see P20-something on your pit board lap after lap, frustration sets in, you override, mistakes happen and you go slower. I never found a rhythm.

My team-mate Dennis Hobbs blagged pole position with a 1:32.6, which is a ridiculous time on the 899 Panigale despite a hurty arm (a fracture). Robbie Brown and Rob Guiver completed the front row, with my other team-mate Leon Morris in 4th.

Later that day was our first race of the weekend held in scorching temps. Everyone was rushing around before the start trying to source ice packs and wet towels in a desperate bid to cool down, as the bikes ran well into 100 degrees during the warm-up laps – the 899 Panigale is a gusset burner at the best of times. Thanks to the heat and a funny farmer who thought spreading shit on his fields was a good idea, Cadwell was also riddled with miniscule shit midges who, apparently, only live for an hour. But that hour is enough time to mate, make babies and breed millions of additional miniscule shit midges.

It turned out to be one of the most soul-destroying races I’ve ever done, finishing 20th with riders in front of me who really shouldn’t be. When I say race, I mean parade. I got stuck in a comfort zone, gazing at the bums of slower riders and never found a way to make a pass. Bobby Brown took the victory ahead of Guiver.

For Sunday morning warm-up, we raised the bike to stop the exhaust/footpegs decking out, which was a serious issue: 3mm at the front and 2mm at the rear, which doesn’t sound a lot but makes a huge dynamic difference. With shagged tyres, I went half a second quicker than Saturday’s race and generally, the bike felt more compliant and willing to carry more corner speed, if a little harder to hustle in the tighter sections. 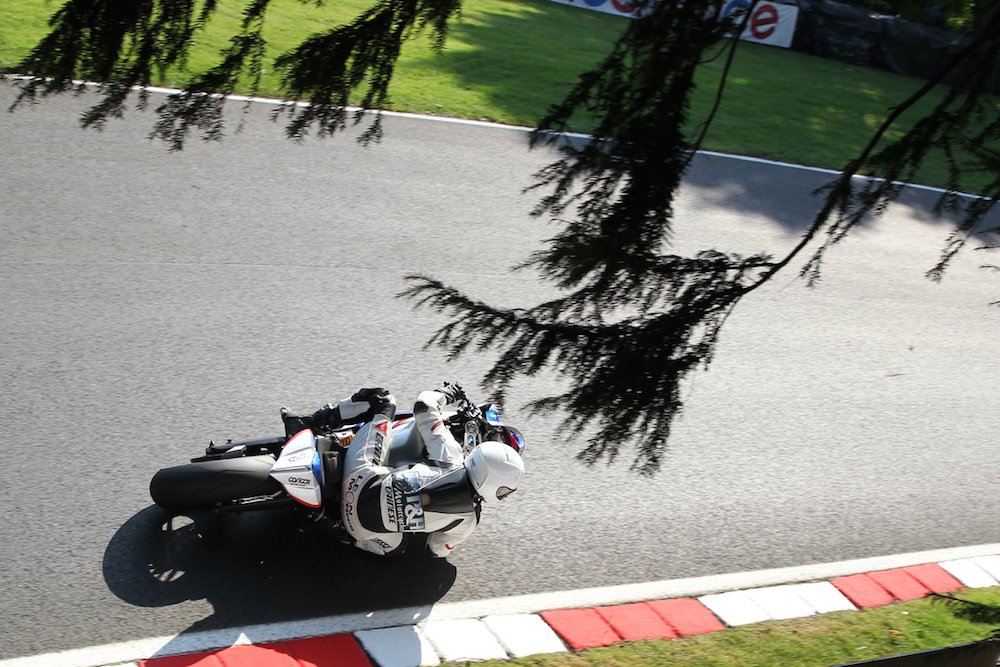 Leon was on it…

I was bang up for race two on Sunday and got away with the mid-pack, as the bike was so much better in the faster corners. For the first time all weekend, I was in the zone and able to latch onto faster riders. A 15th place finish isn’t what I go racing for but it’s a step in the right direction and my first point of the season! Guiver took the win from Leon, who left Cadwell with the championship lead again.

There’s no feasible explanation as to why I was nearly three seconds a lap slower than last year. I could apportion a second to getting slightly older, fatter, balder and generally clinging onto self preservation, but three seconds? That’s an eternity in the racing world and I’ll strive to discover my pace from last season. I have the backing of the best team in the paddock, current championship leaders, and reigning champions, so there are no excuses.

I’d also like to apologise profusely about my complete lack of style over ‘The Mountain’. The super-stiff monocoque 899s need little encouragement to get out of shape, and they were horrendously scary on landing. Certainly no Josh Brookes tekkers going on here.

Two things I’ve learnt this weekend: NEVER skimp on tyres, and I need to lose some weight. Next up is Assen – the best circuit on the calendar – and one that suits our package better.

Shameless plugs go out to the sexy people who make this happen: 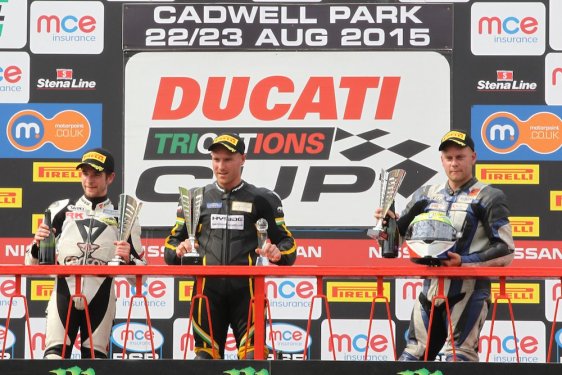 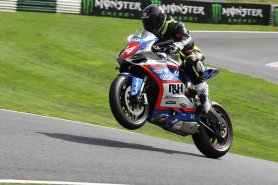 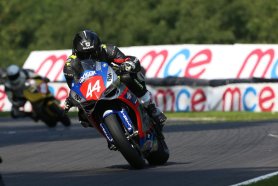