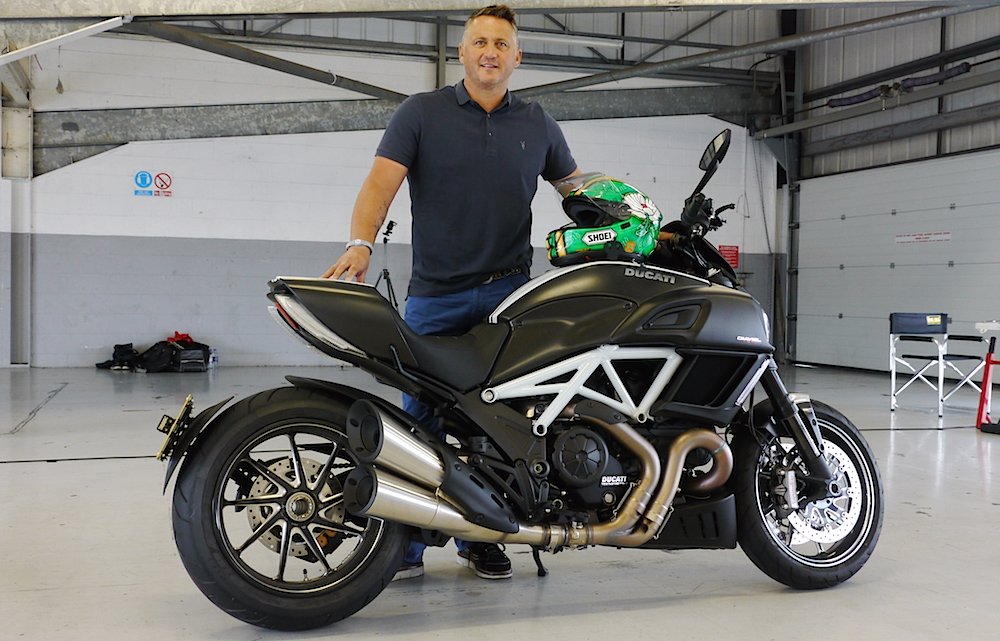 I don’t like cricket. I love it. Actually, that’s a lie manufactured for entertainment purposes but I do enjoy some Ashes action. For me, cricket is a sport that thrives on characters and short, sharp TV-molested varieties of the game to maintain interest in fringe viewers.

Darren Gough is one of those characters who also has a genuine love for motorcycles, but was only ‘allowed’ to ride after retiring. We caught up with the waggish Yorkshire man at Ducati’s trackday at Silverstone, where he was eyeing up a circuit debut.

“I’ve always liked bikes. When I was younger I used to do the usual, getting out on 50s in fields illegally. When I left school I was a footballer before I became a cricketer, but it was always something I enjoyed watching.

“I used to go to the British Superbikes and GPs, and always said to myself, as soon as I retire, the first thing I’m going to do is get a bike. I started with the Get On campaign and I’ve done advanced riding courses. The only thing I haven’t done is a trackday – I get invited all the time. I don’t think it’s fear [that’s stopping]. It’s these suits you wear. I’m not too sure I could get into one!”

As with most sports that only involve one ball, international cricket professionals have a contract to say motorcycles are nasty, dangerous things. “In the contract, it said ‘no dangerous activities.’ So bungee jumping, parachuting and motorbikes were out. Towards the end of my career, it was almost like, ‘so what?’ and if something were to happen now, is it really that bad?

“When you’re playing for England, it’s having the time to do it. Looking back now, I would have loved to have my bike licence in places like Australia and New Zealand to get away from it all. Rather than have a game of golf with the lads, it would have been nice to just go for a ride.

“Three years ago I went to Lesotho in Africa, delivering medicine to the kids in the mountains. That was an amazing experience, going off-road for hundreds of miles up into the mountains helping these kids.

“I’ve got quite a few mates who are into bikes. Freddie Flintoff used to enjoy riding, and one of my best mates in cricket, Craig White loves his trackdays. Brian Moore is also big into his trackdays and comes here all the time. He’s very much nuts on a bike – I think he’s written off a couple of bikes here with California Superbike School.”

Goughy is a top lad. We’re just not sure how he works alongside Adrian Durham on a daily basis…