How does one rationally portray the absurdity of racing at the Isle of Man TT? Even the greatest wordsmiths would have difficulty in articulately describing first-hand experiences, so I’m really going to struggle here. It’s virtually impossible to explain my fortnight of fresh, previously unprovoked emotions and on-track sensations without reeling off a list of expletives – my first lap went something like, ‘fuuuuuuuuuuuuuuuuuuuuuuuuuuuuuuuuuuck yeeeeeeeeeah.’ The rush is incomparable. The TT is my new favourite drug.

Why do we feel most alive while laughing in the face of death? It’s an obvious answer in many ways. Most of us ride a bike for kicks, to have fun, a laugh with mates as a social. My addiction to speed was formerly dealt with via short circuit racing but chasing tenths has become tiresome. There’s riding a bike and racing a bike: two entirely different levels of thrill seeking and adrenaline release. There’s also racing a bike and racing a bike on closed roads at the TT. This isn’t some whimsical variation of an existing theme. It’s utterly unique.

Of course, those of you with children will know the birth of those darling kids automatically goes down as the best day(s) of your life. Strangely, I enjoyed my TT fortnight more than witnessing my favourite pub burn to the ground – a great analogy for watching your Doris/wife/girlfriend give birth. Anyway, I digress.

Armed with the right tools for the job and a JHS Racing team experienced in everything TT, there were no nerves, no butterflies, and no anxiety: merely a genuine enthusiasm to riding the world’s greatest racetrack and sample the rush that so many of my TT buddies have been banging on about. “It’s the best thing you’ll ever do,” they said. “It’ll be fun,” they said. They were right. 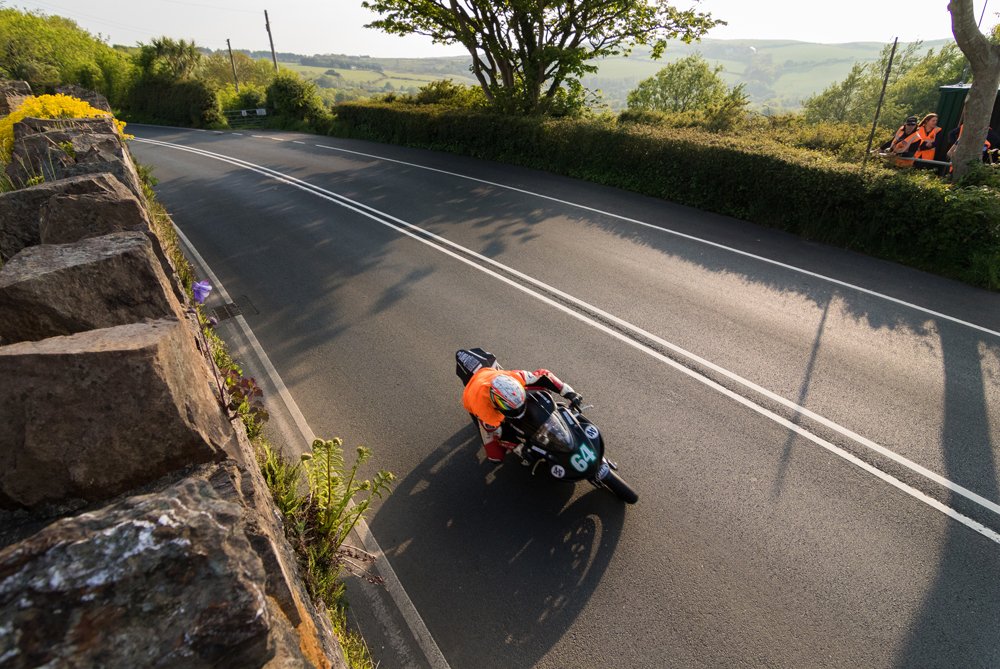 My first sortie was a ‘speed controlled lap’ behind rider liaison officer, Johnny Barton and several other newcomers: a chance to understand the Mountain Course in a competition environment, using both sides of the road at 140mph rather than legal speeds stuck in a hire car. What could possibly go wrong? As we attacked Bray Hill, the initial commitment was surprising. I had no choice but hold the lil’ Suzuki’s throttle pinned, just to keep up with the pack.

The lap was a blur. Those 20-ish minutes morphed into what felt like a few. Other than getting peppered by stones kicked up from the bikes in front, I learnt very little but it was enough to convince me I was doing the right thing. I came back into the pits buzzing my fucking tits off, the boys refuelled the bike, I guzzled on some water and it was soon time for big school: my first unaided lap.

I soon settled into things. Years of homework, studying onboards and trips to Mona’s Isle meant I didn’t feel out of place or hazardous. Wearing the orange novice bib, I had plenty of riders come past and tap their seat units, offering their services in schooling road positioning and racing lines. And, before even thinking, I’d completed a lap…

My second lap that evening was somewhat more eventful. Approaching Handley’s pinned in 5th, the rear suddenly (and violently) locked, accompanying a belligerent metallic commotion from the engine. I grabbed the clutch, darted off the racing line, and nearly stacked it at 2mph as the engine’s juices ejaculated onto the tyres. You didn’t have to be an engineer to figure out it was a terminal issue, especially on closer inspection that revealed a naughty con-rod had escaped from the cases. 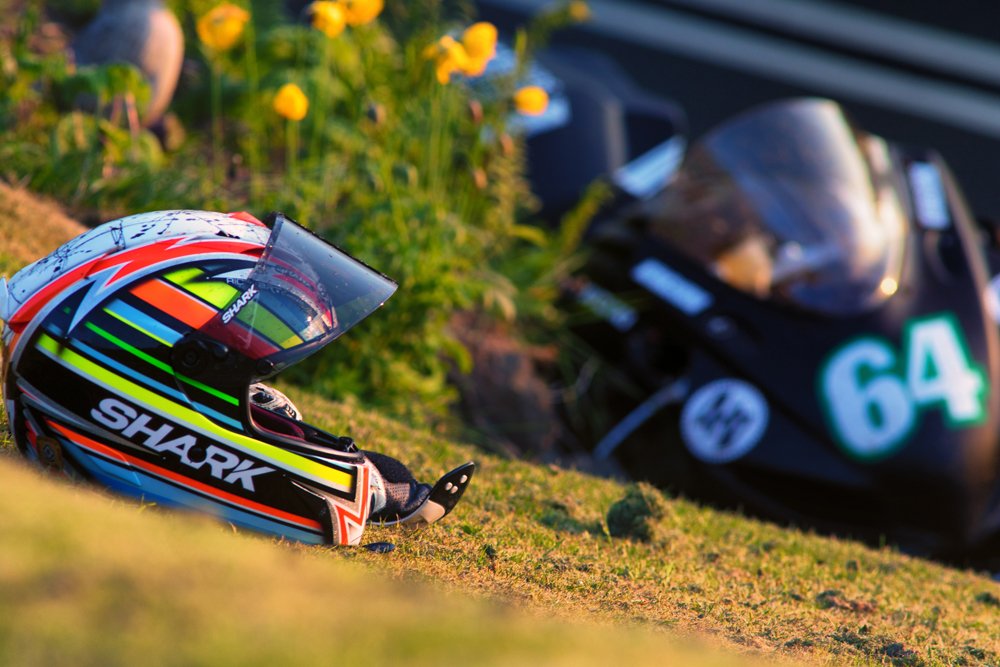 I haven’t smoked in nearly three years but sat down with the friendly marshals and enjoyed a fag and a cup of coffee, absorbing the Manx scenery and the rest of the practice session – one of the best seats in the house.

On returning to the pits, I discovered that my engine wasn’t alone in prolapsing. Dave and Dan’s motors had also suffered from an electrical issue – a con-rod exiting the crankcases and knocking the starter motor of its perch – which turned out to be a faulty set of bolts with manufacturing issues. Somehow, Dan managed to conveniently stop outside a millionaire’s house during a BBQ, munched a few burgers and sank six beers whilst waiting for recovery. Lad.

After promising myself that lap times didn’t matter during these early stages, I was still nursing a chubby when being told I’d nailed a 98mph lap on my first ever circuit. Not bad for a bike that was designed to deliver pizzas and service commuter requirements, bragging a dizzy top-speed figure of 145mph in racing guise.

The bad news? Only the small matter of JHS Racing’s tireless efforts on engine development going to waste. And about £5,000 worth of hardware. Three spare engines were crated up in Bristol and shipped to the Isle of Man via a mate called Wayne, for that was his name. Wayne is good. Wayne, aka the bald Jesus, the saviour. Wayne.

Within 24 hours, we had fresh motors installed, albeit stock motors. This also meant the Nova close-ratio gearbox was ditched in favour of a standard ‘box, which was a tangible limiting factor in performance (the gap between 5th and 6th gear is seismic and scuppers final gearing). My little 650cc Suzuki still felt like a cantankerous superbike in some places, even in stock trim. 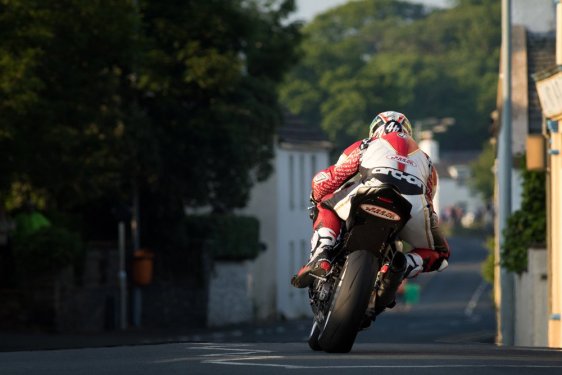 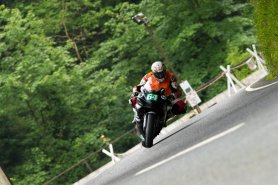 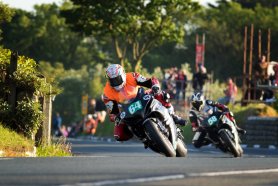 Forget chicanes and nadgery sections. If there was ever a stretch of tarmac that utterly ruined a circuit, it’s the bumps from Ginger Hall to Ramsey. Nothing on this planet compares to that section – maybe chucking a superbike over some supercross whoops – and nothing can prepare you for the riding dynamics. The bike felt as though it was hinged in 20 different points, warping in desperation at the gnarly surface beneath.

The first few nights of practice frazzled my diminutive brain. It wasn’t the speed or danger aspect (I loved those bits), more the mental exertion required: having to concentrate every millimetre of the 37 and ¾ miles, constantly reminding myself of locations, what was coming next, remembering protruding kerbs, bumps, etc. It goes without saying that one lapse in focus could have catastrophic consequence. And while I’ll never complain about glorious weather and unmolested practice schedules, the low-lying sun played havoc with vision and left certain parts of the track as guess work – ideal as a newcomer…

It sounds stupid, but I had to figure out where to go faster and where to wind my neck in, where to push on in places I knew there was room for extra commitment rather than some of the short circuit sectors I was already fairly quick. Riding a Supertwin in the Lightweight category is all about momentum and maintaining corner speed, and I firmly believe that you’ll learn more of the TT course from spanking one of these budget happy shoppers than simply opening and closing the throttle aboard a superbike. There were four standout corners that provided a stern challenge/massive gonads throughout practice, four corners that have to be taken flat on a supertwin: Ballagarey, DJ’s, Gorse Lea and the end of Cronk-y-Voddy, and all four were soon ticked off the list with a massive amount of self-satisfaction and accomplishment. 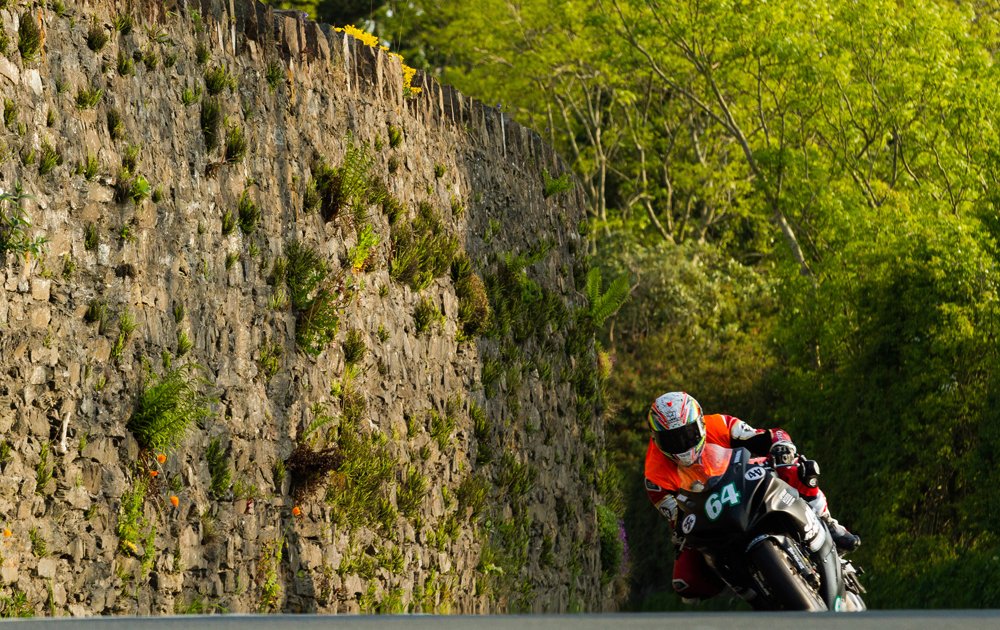 Throughout practice, my nerves got the better of pre-ride preparation. I felt physically sick hours before heading to parc ferme. Not through fear but self-induced pressure to perform and an intangible streak of anxiety. As soon as I jumped on the bike, that sickness vanished and I felt a genuine part of the party.

I’m not gonna lie: there was a tragic accident that really fucked with my head. I didn’t witness any on-track aftermath, but seeing this fallen rider’s kids scooting round the paddock with absolutely no idea of where their daddy had gone cut through me.

During practice and qualifying, we systematically changed the bike’s set-up and gradually improved the feeling I had every time we went out – largely making the bike more stable and bump compliant. With every outing came an improvement in lap time: 98mph, 102mph, 104mph, 105mph and I qualified with a 106mph, surpassing my predetermined goal of 105 and on level terms with the other newcomers. Not too shabby for a bike that went through Sulby speed trap at 135mph. I even had a few riders starting behind me! 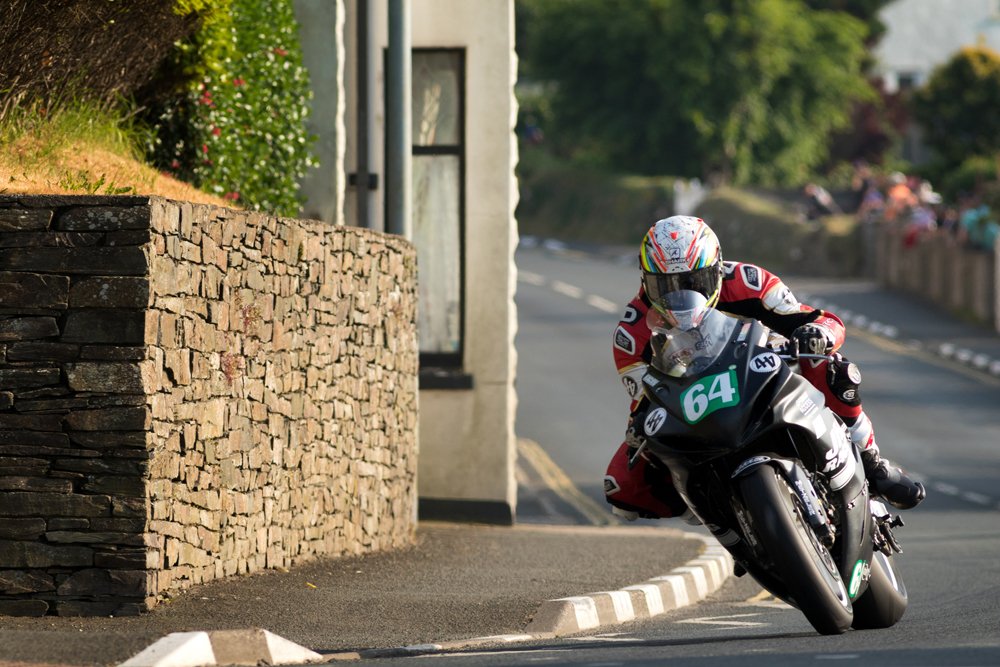 Just before the four-lap race, we made a small but significant change to the rear suspension. It didn’t take long into the race to realise the job was in tatters. Tugging the ‘bars for the left kink at St Ninian’s, my botty soon left the seat, feet wafting aimlessly over the pegs. The change badly affected stability and, frankly, buggered my entire race, but that didn’t stop me from completing the world’s toughest motorsport event – 150 miles and well over an hour of mental and physical torture. I finished 34th and last, lapping nowhere near my qualifying pace which would have put me well inside the top-30. Well, there were 58 starters, and it ain’t the world’s toughest race for no reason.

Big thanks to JHS Racing for helping me live the dream. And big thanks to every one of you guys for the words of encouragement. It was a life-changing event, and this finisher’s medal means more to me than any short circuit win, BSB support class podium or any other racing ‘achievement,’ and I feel genuinely honoured to be part of such a historic event. That said, I’m devastated that I didn’t get to show our full potential. I’ll be back.