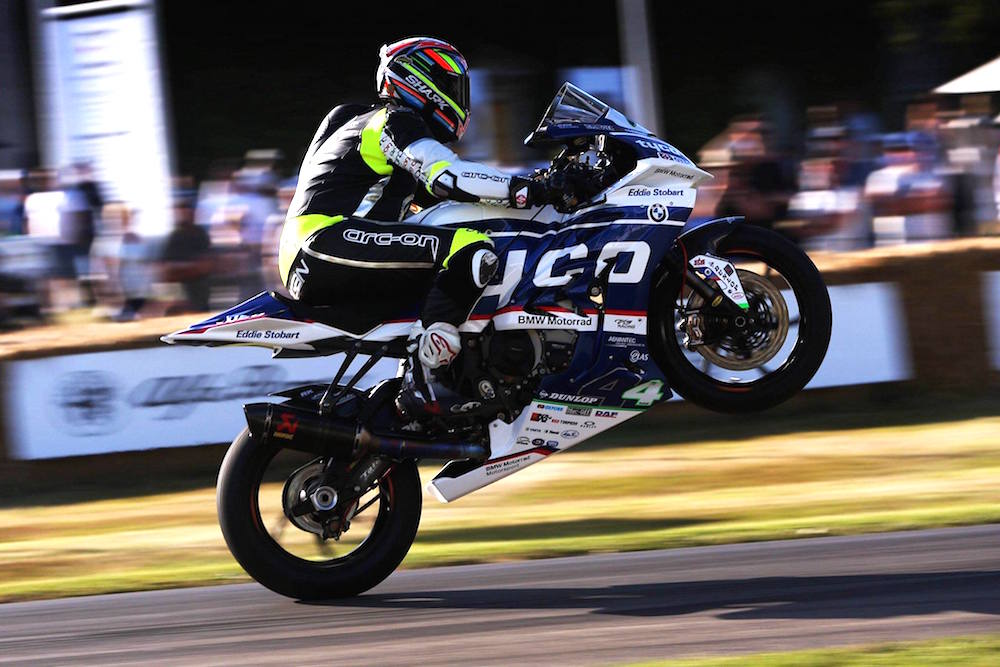 To make the farce even more farcical, I’m rolling away from the startline so go for (what I think is) a dab of rear brake, only to be reminded that I’m sat on Ian Hutchinson’s Tyco BMW superbike – complete with gear shifter on the right where the brake should be. The bike jumps into first gear and stalls in front of a throng of spectators and famous racers. What a twat.

Previously that day, I blagged a spin on the BMW HP4 Race, so won’t bore you with the day’s occurrences. You could say that was a nice little warm-up although, despite the S 1000 RR lineage, the two bikes couldn’t be any more dissimilar. This was the very bike that Hutchy crashed at this year’s TT, albeit in fully repaired state. Given the extent of the crash, I was surprised to hear the bike needed little more than just a new set of forks and a front wheel, plus obvious cosmetics such as fairings and controls, etc. The bike was rebuilt and handed to BMW Motorrad UK to look after at Goodwood before being sold to one lucky bastard.

As with the HP4 Race, there was one rule from BMW that couldn’t be broken: absolutely no burnouts. It was all about wheelies and trying to look fast – not scared of crashing a slice of history. The introductory chat was far less complex than the HP4’s, with no intricate electronics, modes or buttons to worry about. The #4 feels more akin to a stock S 1000 RR than the HP4 Race, despite the onslaught of ‘bar buttons. For starters, Hutchy runs the stock electronics, and the stock S Thou’ dash adorns the cockpit. 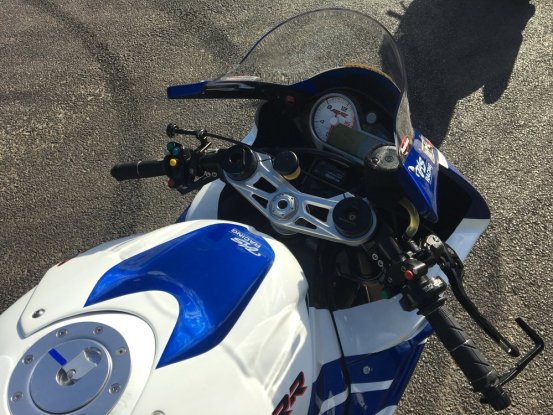 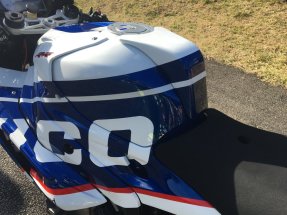 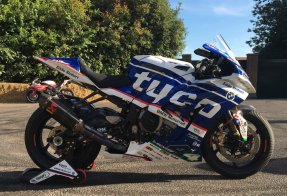 Hutchy’s set-up is something unique to superbike racing at the TT. After lapping within a gnat’s cock of the outright lap record aboard an S 1000 RR superstocker and revelling in its simplistic ways, the Tyco beast has quite a stock chassis, bereft of fancy triple clamps and a braced swingarm (though the latter brags obvious mods for quick wheel changes and wears an underslung caliper). A hefty tank mod shifts weight towards the rear of the bike, presumably for superior rear grip.

Hutchinson’s heritage aside, the most intriguing aspect about this bike was its right-sided gearshift set-up, which stems from the conventional gearbox output on the left, funnelling through the swingarm pivot and out to the right. The team warned me that she doesn’t like gliding into neutral but I wasn’t prepared for the action. Understandably, Hutchy’s couldn’t race without the adaption, but I honestly cannot comprehend how he rides the Mountain Course for six laps with this agricultural set-up. Then again, going through and suffering what he’s been going through, a stiff gear lever is the least of his concerns. 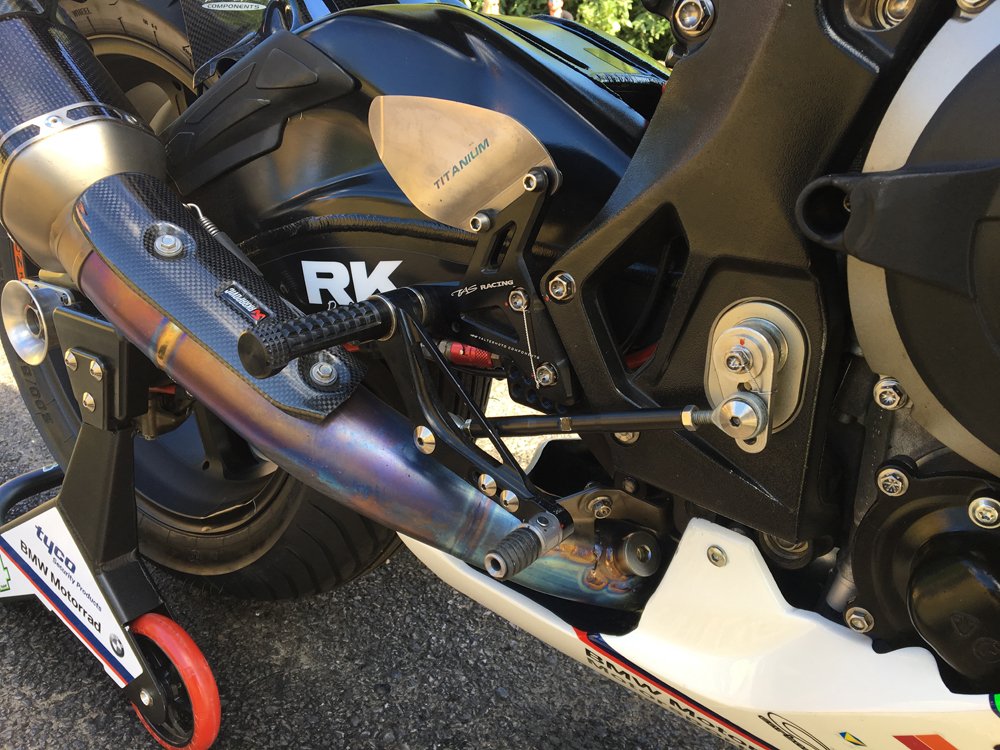 The bike was fitted with Dunlop wets, which should be the perfect option for a run at Goodwood. However, I was given a stern warning and an introduction to the bike’s copious amounts of power on leaving the startline as it span violently away with eager throttle inputs. Up through the gears, and that super-stiff lever action feels more like a Harley Davidson’s than a thoroughbred racer. I won’t claim the right-hand shift came intuitively but you simply have to get on with the job when there are thousands of people watching you.

After the first major corner at Goodwood, there’s a straight that runs parallel with Lord March’s house packed with spectators – and the first opportunity to pull a wheelie. My first attempt looked like a primary school effort, feebly lofting the front after the power curve took me by surprise. The team warned me that it takes some right hand abuse to pull mingers but this is an engine tune that I’ve yet to sample. Buttery smooth and linear at the bottom, pulling hard throughout the midrange before going mental at 9,000rpm. Upon enquiring about horsepower figures, I was swiftly served 225bhp which is entirely believable considering the riot that was happening beneath me. And given that most of the TT course is ridden at ludicrous high-end RPM, and this bike is built purely for the Isle of Man, I’m sure Hutchy’s engine spec’ is one of a kind.

Not surprisingly, the #4 feels chunkier and more substantial than the carbon infested HP4 Race, and rides more like a conventional S Thou’ in terms of handling. Sure, it’s not as visually appealing but the story behind it certainly is. In truth, the HP4 Race should have blown me away. Its carbon fibre fest and delectable chassis sure did, yet Hutchy’s engine made the HP feel very inadequate. 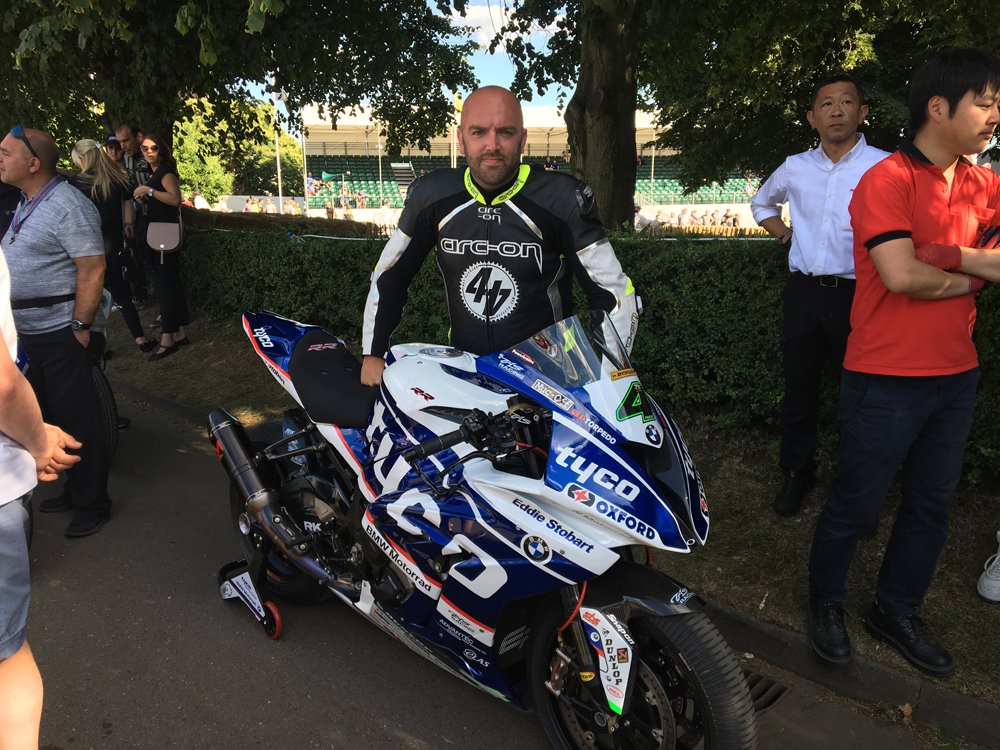 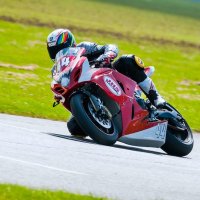