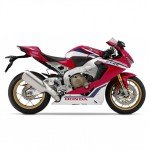 It looks like we’ll be waiting at least another year for the much-craved Honda V4 superbike, as the Big H has just released details of its 2019 Fireblade – and it’s not a V4. In fact, and not surprisingly after just two years, it’s very similar. While it looks damn identical to the previous model (bar some subtle paint changes),… Read more →