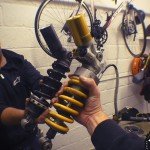 In another episode of 44T Blog Sessions, Jason Statham and Robert Webb attack the Vonda with an ill-fated attempt at removing the poorly shock. With the front-end sorted, it was turn of the Öhlins TTX unit to receive some much-needed affection and recall attention. We wouldn’t go as far as saying this is a guide to removing a Fireblade’s shock.… Read more →