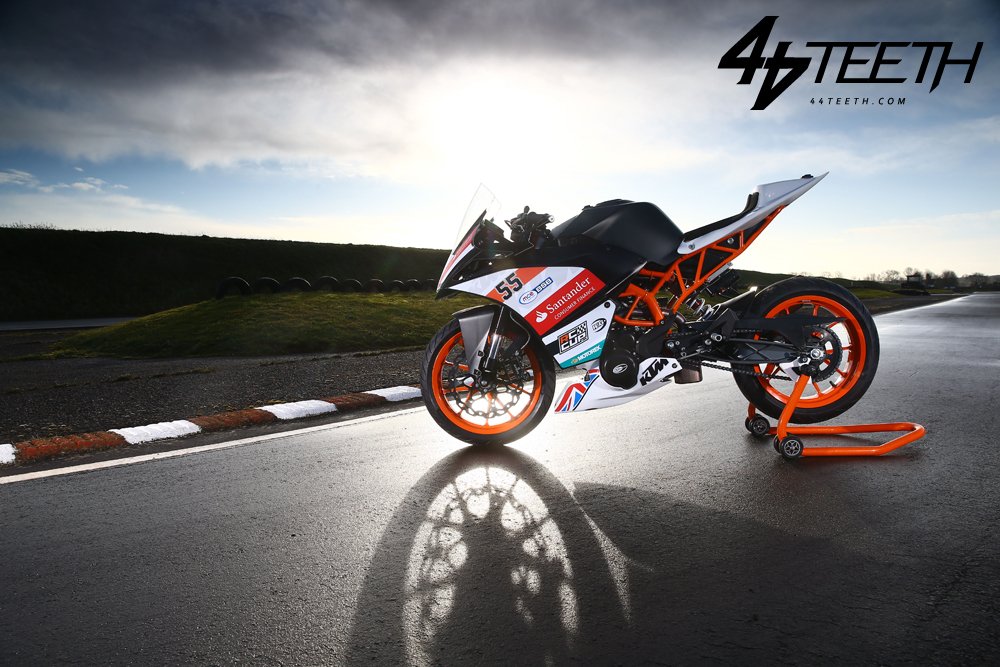 I guess the weekend diet of White Lightning, Lambert & Butlers and mild recreational narcotics seemed fun as a teenager, but I’d give my right nut (the smaller one) to turn back time and have a go at racing one of these.

Ladies and gents, say hello to the KTM RC390 Cup: a one-make series for juvenile hooligans and future UK racing talent, competing alongside select British Superbike rounds on identical RC390s. Sure, the Superbike class brags some household names and eleventeen billion horsepower, but 25 of these tearing round UK circuits will probably provide superior entertainment.

We were invited along to Shenington kart circuit near Banbury for some laps onboard the race-prepped Cup bikes and the stocker, and the launch of the series itself. At £4,998, the road-going RC390 is a sure-fire hit with newbs already. It’s an edgy, far more involving alternative to dreary A2 bikes – it isn’t the tawdry armchair like some of its Japanese adversaries.

The Cup racer doesn’t just look sexual: it’s another level of sharpness, with most segments receiving a performance upgrade. Those keen KTM’ers who say that this is just a standard RC390 with the Power Parts catalogue chucked at it aren’t far wrong, but they’re all palpable and beneficial changes. 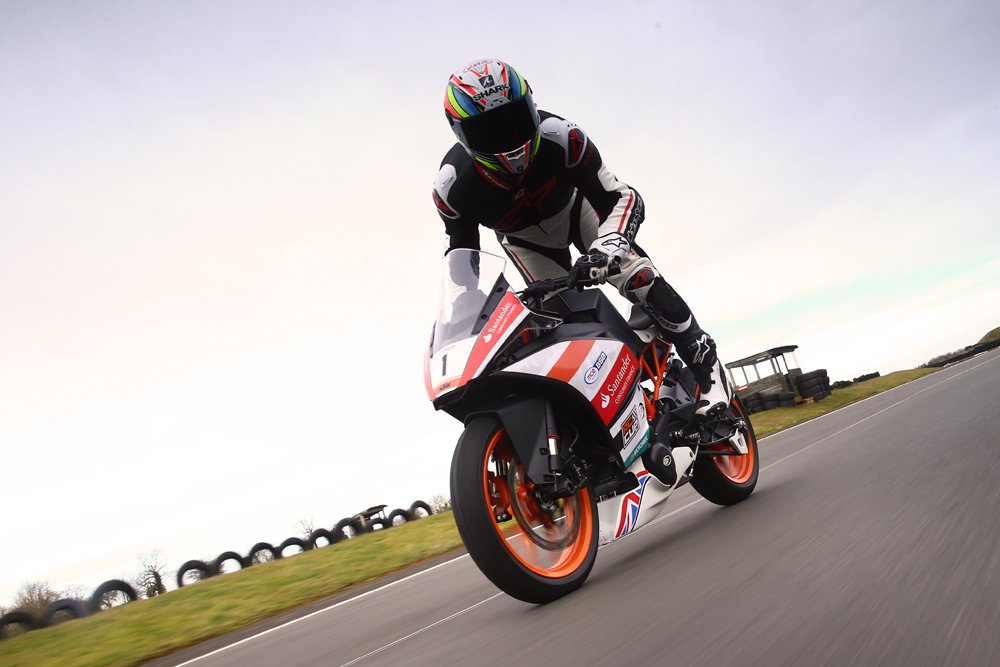 It’s a tall bike at 820mm, and with the added support of the racing suspension, it seems a little higher than the roadie. The ‘bars are nice and wide, and quite high, so getting into full attack mode is easy. That token screen is a bit token, though.

The track was nigh on freezing, although it didn’t take long to get a move on. It has to be one of the easiest bikes to ride and find the limit, even in these conditions, and the final say comes courtesy of Metzeler M7RR rubber: the control tyre for the series. Incidentally, the Cup will run these tyres wet or dry, which should heighten the thrills…

The RC390’s 375cc single-pot motor is stock but boosted by an Akra’ de-cat pipe, which lessens the wet fart/hairdryer soundtrack of the road bike. Granted, power curtails at the top but there’s a real excitable punch in the midrange. The race bike is mechanically restricted via the Bosch 46mm throttle body, limited to 38bhp, rather than the 44bhp of the road-going RC.

Having watched Guy Martin’s TV thingy in India, I’ve seen how they build luxurious houses over there. This might explain why the 390’s gearbox conjures up a few iffy shifts and false neutrals, but they were few and far between, and failed to nullify the fun factor. 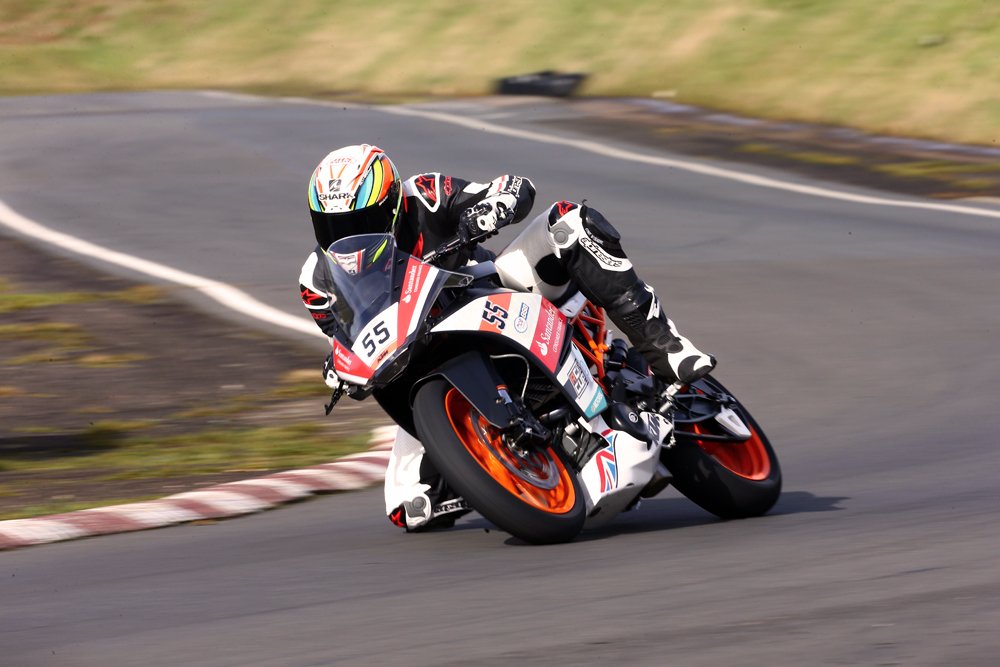 Given that some of the kids racing in the Cup weigh less than my ballbag, it’s not a real shock that the suspension felt a little on the soft side. The relatively budget stock kit is replaced by fully adjustable WP suspension: the same used by Red Bull Rookie racers, so dialling in the perfect set-up isn’t an issue.

We couldn’t fault the handling though. Weighing in a 138kg ready to race (9kg lighter than the stock bike), the Cup dances from apex to apex with minimal input and fuss, flicking from side to side with a whiff of ‘bar and big-bike sensations. Far from the RC250 Moto3 weapon that Baron rode, it certainly doesn’t feel like a budget happy shopper. The chassis feels deliciously taut and responsive, thriving on corner speed and the oversized brake disc that enhances stopping skills. It’s also worth pointing out that the agricultral ABS system has been removed to save 1.2kg and unwanted intervention on the circuit. 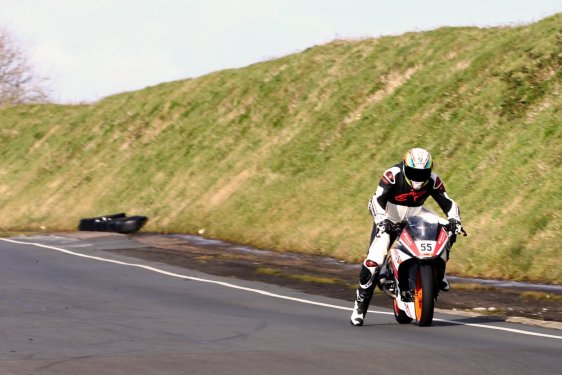 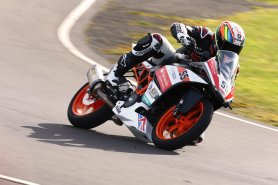 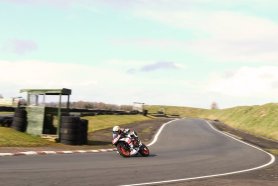 The RC390 Cup (Santander Consumer Finance KTM British Junior Cup, to give it its full name) is open to 13-19 year olds, and is the perfect introduction into the British Superbike paddock.

There are kids upgrading from minimotos, for their first shot at big bikes on big circuits. Welcome to big school. Conversely, there are a few who step down from the British Motostar (Moto3) championship in a bid to land the alluring prizes on offer.

The best two riders (not necessarily the top in the championship) will be nominated for the first round of Red Bull Rookies selection process, and a chance to race full-time in the MotoGP paddock.