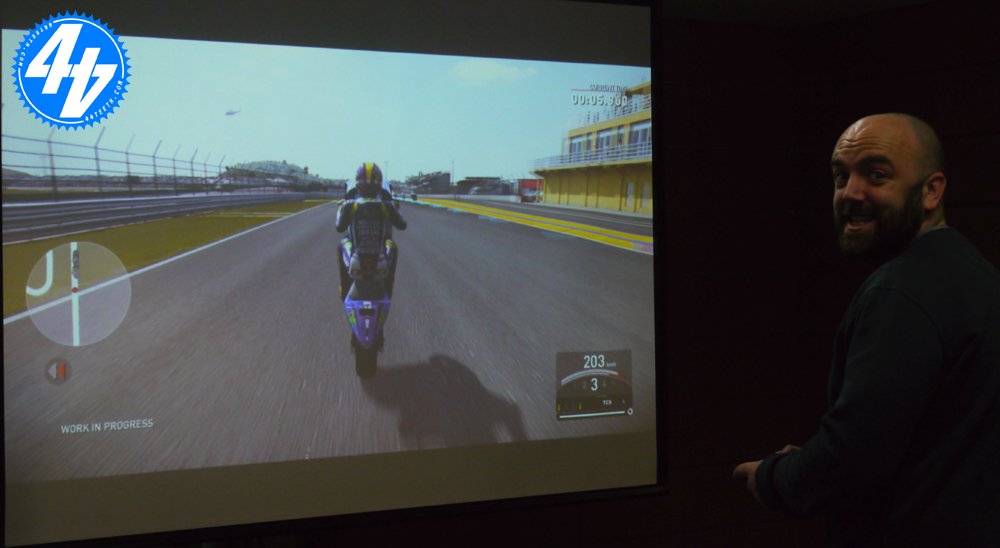 44Teeth was among the first in the world to play ‘Valentino Rossi – The Game’ at the press launch at MotoGP’s season opener in Qatar, although someone else got there before us: Mr Rossi himself. In previous years a selection of GP riders across all classes were involved in development for Milestone – the creators of the game. For 2016, Milestone sent across various builds and VR returned the necessary feedback. He’s hardly going to put his name, the VR46 brand, and his reputation on the line for a shabby game is he?

Rather than simply branding the upgrade as MotoGP ’16, Milestone has collaborated with VR46 to bring you ‘Valentino Rossi – The Game,’ henceforth known as VRTG. Milestone being an Italian racing game specialist and Valentino being somewhat of an Italian racing specialist himself, the duet seemed almost biological. VR wanted a game to celebrate 20 years of racing anyway, so Milestone showed the GOAT some ideas, he liked them, and VRTG was born.

You get all the features of MotoGP ’16 (Moto3, Moto2, career and classic modes), plus a medley of VR46-specific features: riding flat-track at The Ranch, Rallying at Misano and Monza (Milestone is also responsible for Seb Loeb Rally, so much of the physics understanding was applied to VRTG’s rally facet), a VR46 Academy career mode, drifting, and R1M-only races make this three times larger than MotoGP ’15. And with a career spanning from 1996 to 2016, Milestone has recreated all of VR’s previous steeds from 125s to 250s and 500cc two-strokes, many of his old adversaries such as Stoner, Biaggi and Gibernau, plus a host of classic tracks like Welkom and the old Assen layout. Also new for 2016 is a split screen option – something that was taken via feedback from die-hard gaming aficionados – and crashing is slightly more realistic with the introduction of the rag-doll effect. Because we all love a crash… 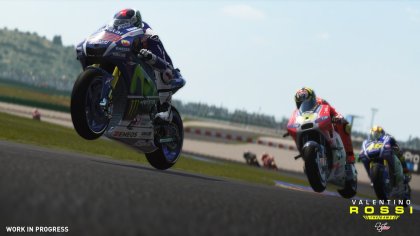 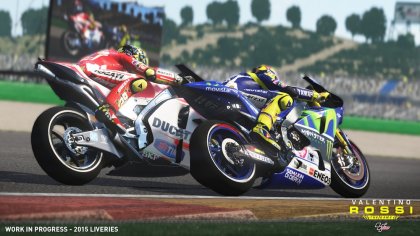 I’ve been criticised in the past for ‘reviewing’ games, sometimes justly, as my gaming pedigree stretches little over the occasional FIFA tournament, smashing shit up in GTA and, of course, any bike game that’s going. But dubbing this snippet as a review wouldn’t be fair because the game wasn’t 100% finished, game time was limited, and we only got to sample Qatar, Valencia, plus The Ranch, although the crux of the gameplay and physics were finalised. Milestone worked on all aspects of the game, tangibly improving the physics engine to reach new levels of simulation. They even worked on suspension and grip systems to function with Michelin tyres, using a new algorithm to better simulate the new rubber.

Anyway, enough of the waffle. What’s it like to play? Well, at first, it’s not a massive leap in development over MotoGP ’15, more evolution than revolution and there’s no doubt that simply hitting an apex is incredibly challenging. I was the only bike journo present among a veritable feast of frustrated gaming gurus struggling with simulation aspects of VRTG. Some were pulling their puddings over Drive Club, happy to revel in arcade playability, whereas gamers who also ride will appreciate the dynamics associated with MotoGP.

99.9% of those playing VRTG will have absolutely no concept of what it’s like to ride the current crop of GP steeds but this game certainly gives an insight into a virtual concept – after all, it’s been tweaked by the man himself. Turn-in still seems a little slow and lethargic, and you have to be bang-on with line choice, but in general dynamics are more fluid.

After several sessions, it was apparent that VRTG is an improvement in almost every area. The graphics are sharper, the physics are slicker (less jerky), terrain and texture realism has taken a real hike in quality, and there’s a palpable difference in grip qualities. Highsiding is precariously easier than previously, as is suddenly losing the front end with overeager brake application, yet there’s enough feedback from the controller to fathom grip levels at either end. As with former MotoGP games, you have to be within a gnat’s pube of the correct braking distance to make a corner, which can become frustrating. 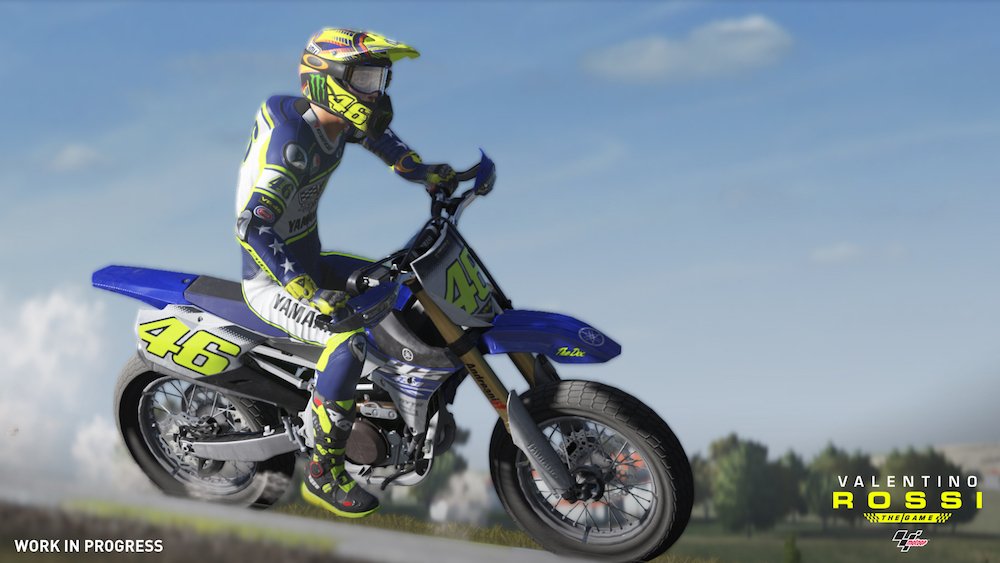 Despite recent publicity, there’s a strict media lockdown at VR’s Ranch and absolutely no public access, yet Milestone was granted exclusive entry for a better understanding of the venue. Game techs used GPS and the original CAD file from the engineer who designed the layout to recreate a virtual rendition. The Ranch feature we played was ‘work in progress’ and audio and some graphics weren’t quite finished. The track surface seems a bit flat and featureless, while the YZ450 sounded more like a wet fart than a motocross engine. It’s certainly easier and more intuitive than GP mode.

If you like your bike games leaning heavily towards arcade and easy to play, you won’t like VRTG. If you, like me, prefer simulation and having to intricately nail a lap to perfection, or simply fancy a slice of VR46 for your PC/console, you’ll love it. From an entirely subjective outlook, it’s difficult not to sycophantically rave about VRTG because of a fundamental love for simulation and the additional VR46 features included.

We’re told the game will be available at the end of May but we’ll bring you a full review in the next week or so when a dubplate version arrives.