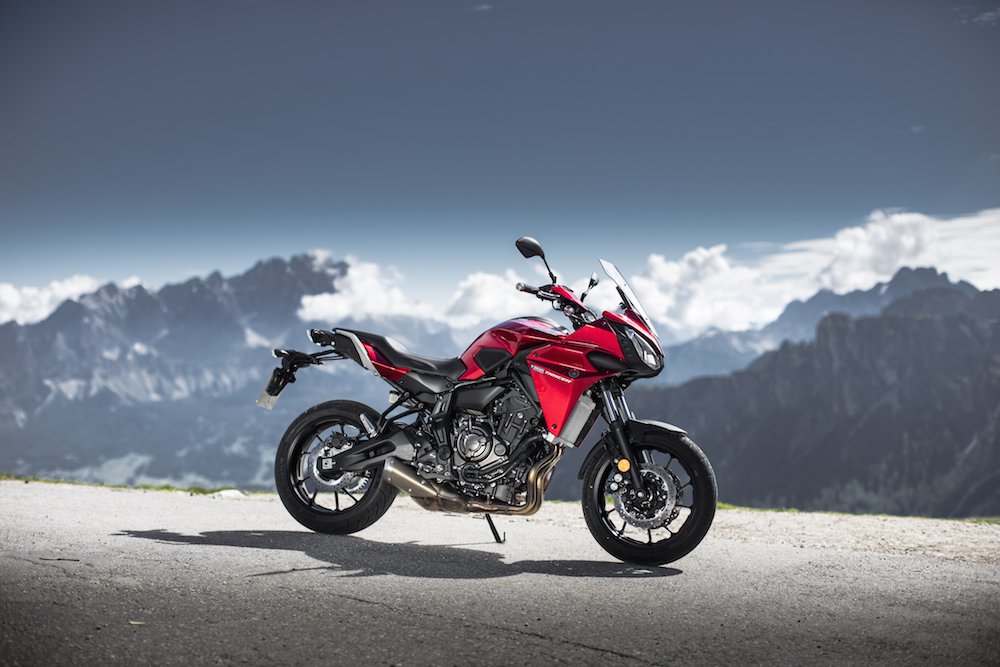 Sports-tourers and more versatile steeds are stealing headlines (and customers) from 200bhp and chasing tenths. A reflection of motorcycling in general? Of society? Or just evolution? Yamaha’s stonking new Tracer 700 is the epitome of this trend. Based on the MT-07, Yamaha has taken an incredible template – that really shouldn’t offer the thrills, performance and fun factor it does for the money – and created a sports-touring middleweight with a simplistic arsenal for just £6299.

The same 689cc CP2 motor that powers the MT-07 also adorns the Tracer, albeit in Euro4 guise without forfeiting its claimed 75bhp – or any power/torque for that matter. Likewise, a near identical chassis to the MT’s ensures sexy lightweight handling. Wheelbase has been lengthened by 50mm, there’s a new shock linkage, and a bigger fuel tank aids touring capabilities.

Other than aesthetical displeasure, we’ve never heard anything negative spoken about the MT-07. Its only objective criticism would be the tawdry suspension that lacked damping control throughout the stroke. Thankfully, the Tracer wears more refined kit, tweaked damping, spring rates and extra travel to cope with pillions, luggage and additional cargo. 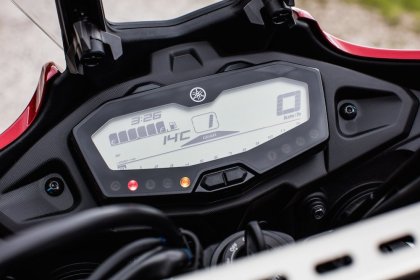 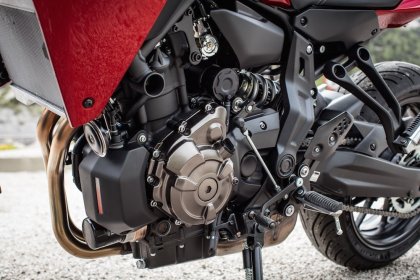 And it comes as little surprise to learn the Tracer borders on sportier side of sports-touring, responding better to smooth inputs. Yamaha chose the Dolomites as the European launch venue: a veritable feast of cornering nirvana, exquisite scenery, tourist-filled buses, and hordes of kamikaze cyclists that actually enjoy peddling up mountains. Most of my dynamic impressions are featured in the video below and there’s no denying its sporting ability, but what of its touring capabilities? As stunning as the aforementioned scenery is, most of our mileage was spent analysing its handling tekkers, attempting to break the throttle whilst chasing poorly-ridden supernakeds.

I’d by lying if I noticed the 50mm hike in wheelbase as a detrimental effect. Normally such a beefy tweak to geometry would be immediately apparent, though agility and that inherent lightweight sensation hasn’t been sacrificed. It steers with a mix of insane pace and unwavering stability, minimal effort to hustle any bend, and there’s no way we could have executed much of the route with such vigour aboard a sportsbike. The ‘bars also feel less prone to jiving than the MT-07s. 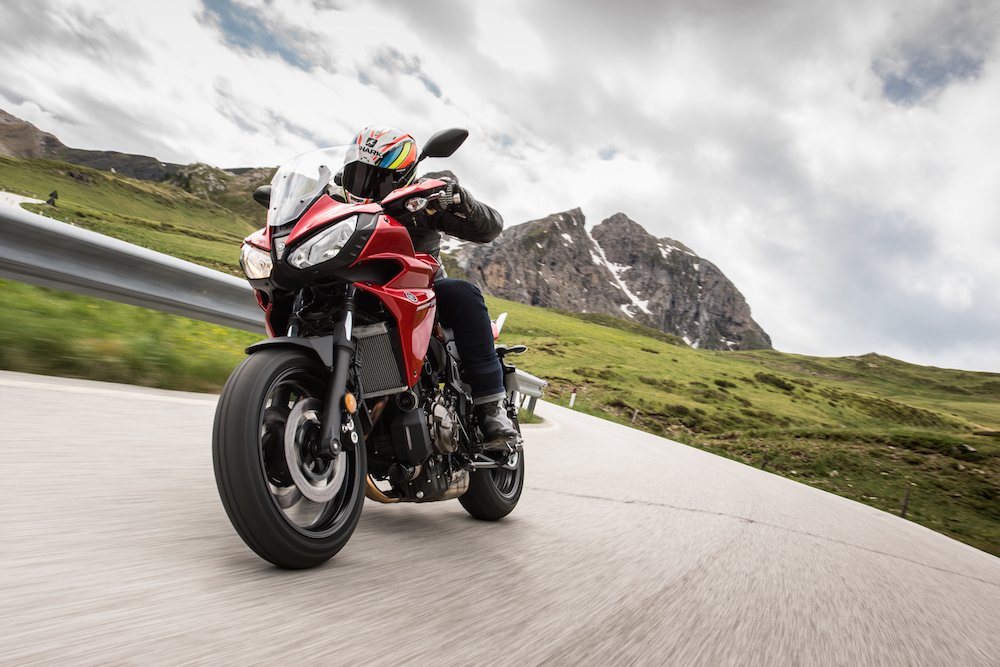 The Dolomites mazy layout and fluctuating elevations underlined very little to bemoan. Anyone that’s ridden the mountains will appreciate how iffy much of the roads can be, yet a palpable road holding upgrade over the MT-07 ensures the Tracer tracks the surface with greater clarity. Again, bump management is superior with more of an executive response from either end. Michelin PR4s supply the end grip.

Also worth mentioning are the brakes. Offering ample performance during everyday chores, the budget set-up, lack of outright power and feel can leave you wanting more as the pace gets hotter. With all due respect to future Tracer 700 owners, out-braking sportsbikes and dangerous riding competitions probably aren’t high on the list of ownership qualities.

But onto the highlight, the crème de la crème, the Tracer’s epicentre: that CP2 engine. Without becoming too engrossed in the crossplane marketing hype, it unequivocally delivers in every department and provides an intangible fun factor to any pilot. Shove a conventional parallel twin into the Tracer’s frame, and it wouldn’t boast the same sparkle. Traditionally, two-pots have to make sacrifices at some point in the rev range. The CP2 powerplant is flawlessly smooth from idle, power on tap whenever you incite the throttle tube. No surging, no hesitations: just a crisp throttle response and a delicious spread of power that belittles its cubes. Aside from the inability to secrete £50 notes from its silencer, my only real qualm with the engine is the timid exhaust note – which isn’t Yamaha’s culpability. 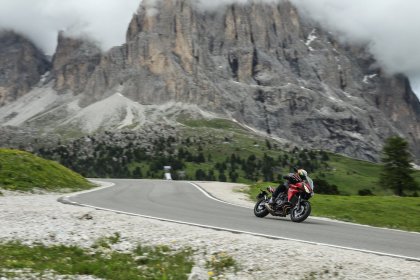 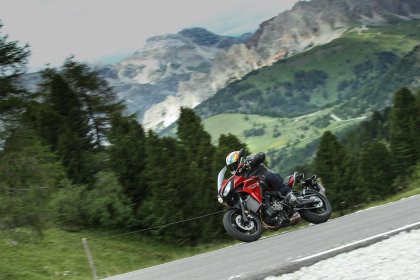 After clocking 245 of the Dolomites finest kilometres – 152 miles in UK money – the reserve light had just started to flash, so there was roughly another 40km in the reserve tank. Not bad frugality considering the throttle abuse. Comfort wise, I was experiencing sore botty syndrome within a few hours in the saddle. That said, the seating position is intuitive, compact yet roomy for larger riders – a far more serene ergonomics triangle than the MT-07’s. Controls are light and instinctive, it’s relaxing enough during extended periods and accommodating when you start to dial in more committed cornering. Wind protection is a very personal and entirely subjective dependant on size, riding style and whether or not you’re a fussy bunglechuffer. 155kmh was the highest figure displayed on the Tracer’s dash all day, and wind noise and buffeting was never an issue (no shock given the Tracer’s extensive frontal section and 64mm adjustable screen).

Sometimes, a bike is just simply brilliant regardless of technology, price tag or cubic capacity. Yamaha’s MT series – in all formats – has blown the back doors off the motorcycle industry. The middleweight sector has been further strengthened with the retro XSR700, and now the über versatile Tracer 700. Multi-platform bikes are nothing new, although we’ll be seeing an awful lot more given the world’s economic shittery. 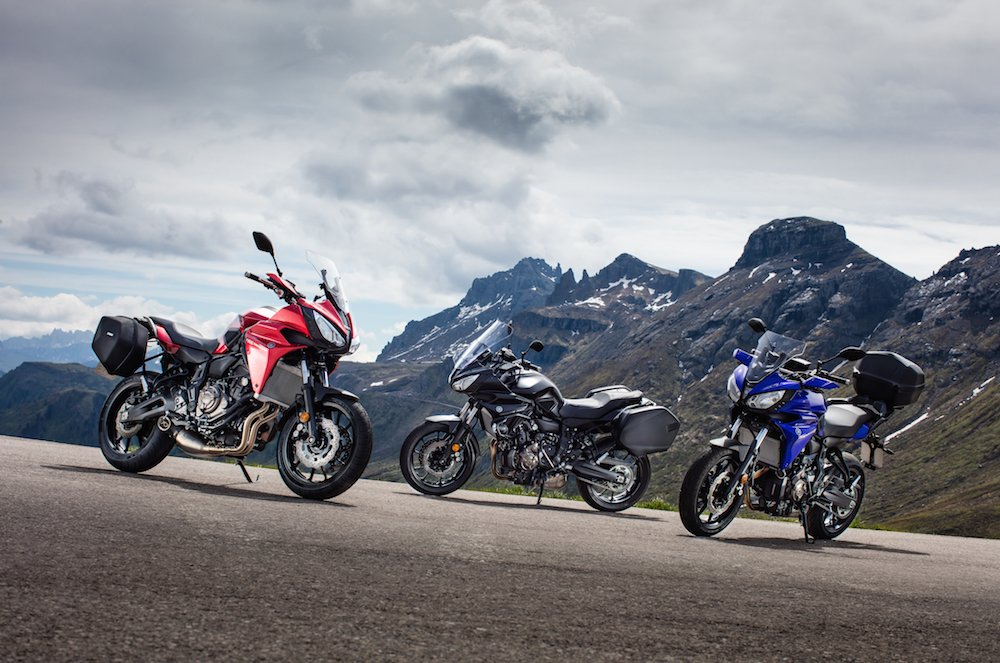 There’s also the question of whether the MT platform would be eligible for a Lightweight TT entry. Bragging 689cc, the CP2 motors are currently too naughty for a Supertwin, although we’re hearing rumours that the Yamaha could be allowed a chance to compete against the throng of Kawasaki ER6s and the odd Suzuki twin. Something has to change anyway and another core manufacturer would only boost the class.

Plenty of you guys have asked whether I’d buy one with my own money. Being a motorcycle journalist, I can’t afford to feed my own kids properly, let alone a motorcycle in an unflavoured segment. But if I was in the market for a middleweight sports-tourer, there’s no question it’d be the Tracer 700. BMW’s F 800 GS is an obviously popular rival and, while component and practical, lacks the thrills of the Yamaha. The same can be said for the more adventure-influenced Suzuki V-Strom 650. A more appropriate adversary is Kawasaki’s Versys 650, although, again, the Tracer has the edge in my opinion.

Try one. You’ll love it. And if you don’t like the red, there’s a blue and a black option… 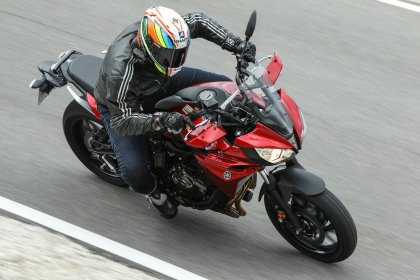 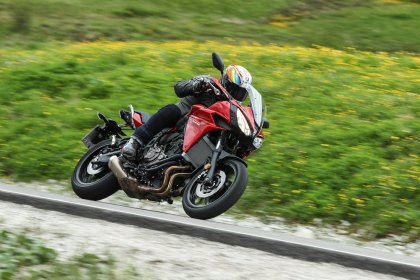