Es are good. Unlike The Shamen’s 1992 smash hit, I’m not claiming ecstasy pills are good. No, I’m talking electric bikes, having recently sampled Zero’s SR at a cosy little press gathering in Surrey. Celebrating 11 years of existence and a resurgence in the UK with new dealers, Zero has gone from making flimsy off-road e-bikes to offering a fleet of battery-powered roadsters that pack plenty of punch – a fleet that’s also A2 licence friendly.

There are currently several fundamental flaws with electric motorcycles. The first is battery life, the second is price. And there could be a third for the pedantic – charge time. But there are also plenty of obvious advantages to electric bikes: a maintenance free schedule, next to bugger-all riding costs and saving the ozone layer and trees and baby pandas. There’s also the recent added bonus of our fine folk at Westminster offering a £1,500 grant for all electric vehicle sales, which essentially means £1500 off list price. Winner. And when you consider a total charge costs roughly a quid, that’s a quid for around 100 miles of playtime.

Previous electric rides across the board have tended to imitate those shit mountain bikes from Argos: flimsy, sparrow-limbed and cheap looking. The £15,690 Zero SR – with man-size components like pukka fully-adjustable Showa suspension – is a naked roadster that brags an air of robustness and real substance. It’s small, don’t get me wrong, but there’s a big-bike element to its swagger. With a riding position that instinctively lofts you over the front wheel and ‘bars pitched forwards, there’s a sense of command over the bike and the SR feels like a bona fide naked weapon. We set off from our base at Brooklands in Surrey in ECO mode, which limits power to around 60% of its potential output and will more than suffice in urban surroundings. The throttle is smooth, as is the power delivery, although ECO mode didn’t last long…

With just a tap on the Mode button situated next to the throttle (which has to be closed), Sport mode is activated and you’ll get full power. Zero reckons the SR churns out the equivalent of 70bhp, albeit 70 electrocuted ponies, so on par with your average middleweight naked and I was soon gazing at 90-shaped digits on the dash. The interesting nugget is its claimed torque figure, which is 146Nm – more than any road-legal superbike. In realtime, the SR feels as sprightly as an MT-07 when momentum is gained but it’s the initial gush of power from low down that’s its strong point. And we haven’t even mentioned traffic light GPs yet.

Immediate grunt aside, the SR’s initial standout feature was just how smooth the throttle is. Its closed-to-open action is seamless, like the peachiest fuelling around, and a massive leap in refinement since the last time I tested a Zero. Regardless of the SR’s absent soundtrack – other than the motor’s whine and some mild road noise – opening the throttle is still an exciting proposition. Brammo attempted to inject some badass into its Empulse by installing a gearbox, but trying to mimic conventional petrol power only adds unnecessary weight and complexities. Zero’s latest effort doesn’t require artificial thrills. 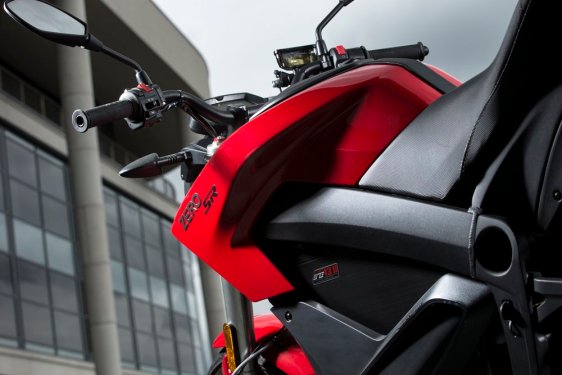 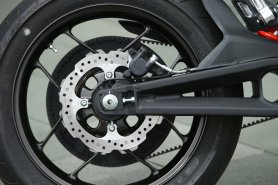 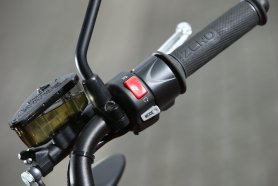 A cold Spring morning wasn’t the most suitable of days to test balls-out handling performance. Even so, the SR responded well to abuse and backed up its aesthetics with staunch commitment. Only when pushing the bike around does it feel cumbersome, though that’s more to do with no neutral gear and internal workings putting up a mild resistance to the wheels turning than anything else. The actual motor itself weighs just 19kg. It’s the battery pack that continues to be an electric bike’s dietary hamstring, although the SR tips the scales at a respectable 188kg, ready to ride.

Looking down at a single disc at the front could be misconstrued as cost cutting. In truth, the SR’s brakes offer ample stopping power, especially considering the complete lack of engine braking. It behaves like a two-stroke on corner entry, floating into a bend with gusto and the minerals to endure high mid-corner speeds. At mediocre lean angles, it’s right up there with any petrol-powered naked, steering briskly and predictably.

As we surprised several Lycra-clad cycle twats folk at the bottom of a busy Box Hill, I got more looks riding the SR than a belligerent superbike. The haunting drone of an electric bike before the sight of one whizzing past is still a peculiar experience for most of us. Aside from other vehicles and pedestrians not being able to hear you coming, the only other downside to no engine noise is passers by hearing you fart. Ridden in isolation, there’s almost nothing to moan about. Someone mentioned a lack of handbrake if the bike was parked on a hill. Solution? Carry a cable tie. The only missing ingredient is, ironically, an electronic aid. Given the instantaneous gush of power and little engine inertia to calm things down, traction control is the only want on my SR wishlist – something that Zero reckons is coming to the range soon. For the techno queens among you, there’s a Bluetooth app that connects your phone to the bike, allowing manual control of torque settings, top speed and regen, plus the option to look at riding stats.

Zero claims 200+ miles from the SR, although that’s with the optional Power Tank upgrade which’ll cost you another £2500. In stock trim, expect 150 miles from urban riding and mild throttle openings, and you can roughly half that when the throttle takes a serious battering. Still, that’s the same fuel consumption as an Aprilia RSV4 or Yamaha R1’s full tank. The iffy news is an 8-hour charge time if the battery is absolutely empty. Again, that can be trimmed by 250% with an additional charger.

We’ve seen battery-powered potential at the toughest race in the world. The Isle of Man TT’s Zero race (which has zero to do with Zero) has proved that electric power can be bloody fast, as well as emissions free. Personally, I think we’ve got bigger issues to worry about than saving the planet, and the SR shouldn’t be considered as a direct replacement for sucking, squeezing, banging and blowing. Until the time comes when petrol heads are forced into buying battery over gasoline, electric bikes will still at the bottom of the motorcycling food chain for the majority of us. That doesn’t stop the Zero SR from being a genuine option for those looking for a cheaper commute, or simply looking for something completely different. It’s a fun bike. There, I’ve said it. And with 0-60mph stats of well under four seconds, it’ll chew anything from a standstill. 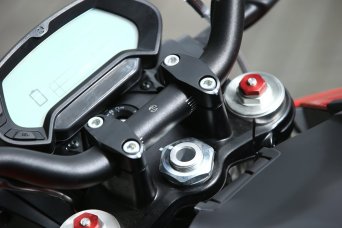 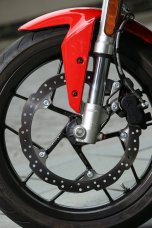 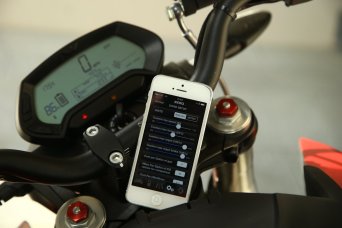